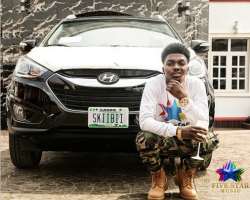 Five Star music record label which houses the likes of sensational singer, Kcee and Harrysong, have stepped up plans to boost the label with the latest signing of another singer, Skiibii.

Kcee made the announcement recently while a new 2014 Hyundai SUV was presented to the singer as part of the deal.

Though the years the singer will spend in the record label was not made known, but it is believed that with the signing of the singer, it will help boost the music flavour which already existed in the label.