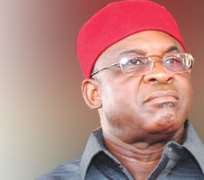 Nigeria’s Senate President, David Mark, has reasoned that one of the ways to end the reign of insurgency and the onslaught of Boko Haram on Nigerians is to unmask their sponsors within and outside the country.

Mark implored community leaders and citizens alike to collaborate with security operatives in order to fish out the financiers of the insurgents.

The Senate president, who spoke after decorating his aide-de-camp (ADC), Abel Miri, with his new rank of Assistant Commissioner of Police (ACP) in Abuja yesterday, urged security operatives to bring their intellect and investigative skills to bear on discovering those behind the insurgency.

'The situation demands extra-ordinary measures to handle. All of us, irrespective of status, must be alert to our responsibilities. Let us rise as one people faced with a common problem to say no to these harbingers of death. Let's come together and work hard to free ourselves.

'All Nigerians must see these terrorists as a threat to our existence. Nobody should sit on the fence anymore. It is a choice we have to make in chasing these terrorists away or wait to be consumed by them. This is not about politics, religion or ethnicity. It is about our survival as a nation,' he said.

Mark also reminded the newly promoted ACP that the new rank demanded higher responsibility and dedication to the service of his fatherland, saying: 'As an officer and gentleman, your loyalty is to the Federal Republic of Nigeria.'

He told Miri that his action should 'be fair and firm, devoid of any sentiments; you must be just to all persons no matter the circumstances.'

Water Resources Minister, Sarah Ochekpe, who was among dignitaries that witnessed the decoration, thanked the Senate president for giving Miri the platform to distinguish himself in his service to the nation. Agency report