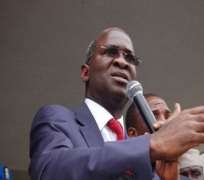 Governor Babatunde Fashola of Lagos State on Monday presented a 2015 budget proposal of N489.69bn  to the state House of Assembly for consideration.

The News Agency of Nigeria reports that the amount was the same as that of 2014.

Fashola said the budget size was retained in order to keep zero deficit for the incoming government.

Fashola will be leaving office in May 2015 after completing two terms of eight years.

'We have retained the same budget size of 2014 to keep zero deficit. This will give the administration the room to start up very quickly,'' he said.

He added that the 2015 budget would focus on payment of contractors' liabilities to enable the government to complete as many projects as possible before handing over to the next administration.

'For example, out of the 400 roads that we promised, we have completed over 190 in the last three years, with 210 at various advanced stages.

'The onset of dry weather provides the opportunity to complete all of them,' he said. NAN