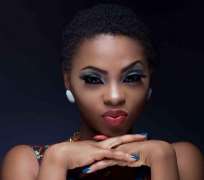 Despite the fact that many of the male entertainers have admitted having a crush on her, Chidinma says she is not interested in marrying or getting hooked to any of them.

Miss Kedike who recently revealed the shocking story of how she was born blind said, "personally, I wouldn't want to marry an entertainer, except God has another plan for me. Some people might disagree with me on this one, but I just feel that after the madness in the industry, I just want to go back home to sanity.

You'll just want to go back to being cool and having your peace, rather than going back to someone who's also in that same madness. I was talking to someone and the person said: “Chidinma, I don't agree with you because I think the person will understand you and understand that this is what you do.” But I still don't think I want to do that."

Describing her kind of man, she squealed that she seeks a very understanding man that's not jealous.

"Is there ever an ideal man? I think he's just someone who understands me because I think that understanding is very key. He is someone with a very high level of understanding, intelligence and tolerance.

With this business of mine, it takes someone who is very patient because some guys would say: “You took a picture and the guy was holding you this way and that…” It's crazy and it actually takes someone who understands, believes and trusts me totally. That is my definition of an ideal man. He doesn't need to have all the money in the world. It's very natural for girls to tell you that they want tall, dark and handsome guys.