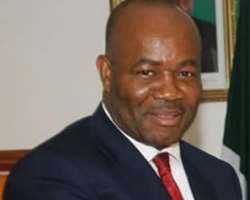 Governor Goodswill Akpabio of Akwa Ibom State said governors, aspiring to be elected into the Senate in 2015, posed no threat to senators seeking re-election.

He said this on Thursday in Abuja while speaking with newsmen after submitting his nomination and expression of interest forms to contest the Akwa Ibom North West Senatorial District in 2015.

Akpabio, who is also the Chairman of the Peoples Democratic Party Governors Forum, said the political space was wide and open for healthy competition among all players.

He said there were only nine serving governors, seeking the senatorial seat in 2015 against 109 senate seats available in the upper legislative arm.

Akpabio, who is gunning for seat of the incumbent from the zone, Senator Aloysius Etok, however, says he will love to have about 75 per cent of senators returned to the Senate.

This, he said, would ensure a robust legislation for the country as the exposure of such senators would perfect legislative duties.

He, however, added that serving senators had 100 per cent chance to return to the Senate, stressing that there was no significant threat in the political transition.

Akpabio added that whatever dissenting voice that was being heard at the moment, would be silenced by the PDP internal resolution mechanism, saying that it was a party affairs.

'The senate has about 109 members and PDP serving governors interested in going to the Senate are not up to nine; so you still have at least 100 chances for incumbent senators.

'And if it is possible for us to return more than 75 per cent of our senators in the National Assembly, it would help a lot in legislation and deepen democracy,'' Akpabio said. NAN