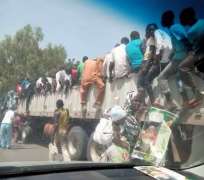 Over 2 million Nigerians are currently living in Bokoistan, the occupied territories in Nigeria's northeastern States; Borno, Adamawa and Yobe. According to a report in Daily Trust Monday, November 03, 2014 by Abdullahi Idris, the total land mass currently captured by Boko Haram is over 20,000 square kilometers, which is bigger than three Nigerian States. Over 10 local governments have been swallowed by Bokoistan, they include as we have earlier listed: Gamboru-Ngala, Dikwa, Abadam, Marte, Bama, Madagali, Gulak, Gwoza, Mitchika, Mubi, some names of occupied towns are: Vintim, Ran, Gulumba, Ngala, Wulgo, Banki, Darjamal, Nguro Soye, Izge, Ashgashia, Pulka, Ngoshe among others.

A Serf System
Naira is no longer the currency of occupied Bokoistan. Trade is by barter and all enslaved citizens are forced to submit their earnings and produce to the Boko Haram authorities. Women we spoke to in the occupied lands explained how the terrorists come and seize all valuables and essentials of living from their homes including stored food and kerosene. Terrorists also seize the young at will for sex or to be forcefully trained in large groups of thousands of conscripted youth, new armies. In regions like Gwoza and Bama, over the last two months of occupation, thousands have been slaughtered at will as genocide is the way of the new nation: 4,333 have been killed in Bama by the Tashama Bama, escapee count from last Monday.

Nigeria's military has collapsed. Years of massive embezzlement and sabotage of the military under the PDP political administration has left the military totally unable to mount a résistance to Boko Haram invading forces, talk less reoccupy annexed land. The 40,000 Nigerian troops can no longer defend Nigeria from the 30-50,000 and increasing Boko Haram French controlled forces. Boko Haram is conscripting thousands of able youth in Bama, Gwoza, Mubi and all other occupied areas. They celebrate the systematic handing over of Nigeria's arsenal to them as happens each barrack they take over. From Mubi, Boko Haram have been rejoicing the receipt of container loads of new arms and ammunition which their new conscripts will be armed with.

While The Jonathan-led Nigerian government refuses to enable the arming of civilians in the northeast and volunteers from around the nation to defend the integrity of the rest of Nigeria; Boko Haram on the contrary is arming all who it occupies to develop a most deadly army that will have the potential to overpower any in West Africa.

No Hope From Religious and Traditional And State Leaders

The state representatives; the various traditional and religious leaders as well as the Statesmen and other northern and entire Nigerian co-called elders have abandoned the cause of the people in occupied lands and the cause of Nigeria as a whole in effect. Leadership is no longer a pride and office of service, but simply an opportunity to amass cash and purchase property abroad (to evacuate the family). The plight of the people of Borno has probably been left to the Sheikh of Borno who has likewise not been very publicly noticed shouting and making resolutions for his people to be defended and to defend themselves.

The plight of the people of Adamawa perhaps has been left to the Lamido of Adamawa alone. There has been no uproar and notable decision from the Sultan of Sokoto towards proactive involvement of the north in the defense of territories being lost. Perhaps these leaders are not cognizant of the fact that the Boko Haram forces will stop nowhere and will stop at nothing till they overtake the entire north and nation.

The new Emir of Kano, who the people of Nigeria stood up to defend; rather than being heard and seen proactively engaged in the organization of a northern and Nigerian civilian and army response to defend and recover the north, has been seen lately making peace with the ruler and enemy of Nigeria who made peace with the Boko Haram nation at war with us and enslaving our millions. The friend of your enemy is your enemy, it is said. It is hard to recognize as friends, those who choose to befriend the leadership of Nigeria, proud friend and peace maker with occupying terrorists and the sponsors of these.

Will Nigerian civilians stage a response? What is the value of Nigeria's leadership system; traditional, military and democratic in light of the lack of foresight, commitment, skill and ability to recognize the serious threats as we face and to direct and coordinate the urgently needed responses to them? The governor of Borno like many other educated Nigerians was fooled that a ceasefire was logical, tenable and in process. It is clear that few have the requisite ability to understand the reality and demands of the current desperate situation Nigeria has been forced into by the Jonathan years. Will Nigerian masses resort to solving this problem themselves as the terror hits breaking point; and will that be too late. And finally in the event that we the people do so; what will be the fate of these leadership institutions after we do? Nigeria dangles.