Chita Agwu Set To Wed Her Malaysia Based Fiance Tomorrow 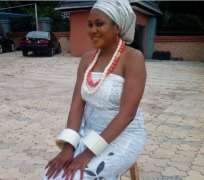 Nollywood beau, Chita Agwu, who started acting in 2009 and has so far worked her way up to the top of the ladder with more than 40 movies to her credit is set to officially marry traditionally tomorrow, Saturday, October 25, 2014.

The actress, model and Akachawa presenter would walk down the aisle with her Malaysia based fiance, John Maduabuchi.

Lately, Chita Agwu have been in the news, not only because of their celebrated engagement but more because of the romantic ways they have been celebrating their new-found love.

On Chita's birthday a couple of months ago, John whisked her away for an exotically romantic celebration in Dubai.

Just few hours ago, Chita alerted everyone up with the ultimate news of her upcoming traditional marriage.

“ I shall be privileged to have you in one of the auspicious moment of my life. I hereby invite you to my traditional marriage ceremony between Chita Agwu and Johnson Maduabuchi, which takes place on 25th October 2014 in Umuobuna Uburu Ohaozara local government area of Ebonyi State” she wrote in a Blackberry message