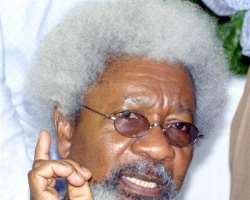 The ninth edition of the Wole Soyinka Award for Investigative Reporting opens for submission of entries on Saturday October 4, 2014. This is happening as the 2013 winners return from a one-week study tour to the United Kingdom which spanned from Monday 29 September to Friday 3 October, 2014. The international exposure included classes at the Thomson Foundation as well as visits to some media organisations in the UK.


The award is open to any Nigerian professional reporter or team of reporters (full time or freelancers), who have produced a published story whether through print or electronic media (television; radio or online) primarily targeted at and received by a Nigerian audience.


Entries will be scored by a panel of judges drawn from the media and related professions who are passionate about investigative reporting. Towards strengthening the judging process, the Wole Soyinka Centre for Investigative Journalism (WSCIJ), introduced an entry coding system that makes the details of media house and by-line of entrants anonymous to judges in 2012. This has helped to further increase the credibility of the award programme.


The report women category is introduced this year as a part of WSCIJ's Report Women! project. The project is geared at increasing the reportage of girls and women issues in the Nigerian media. The award will reward the most outstanding story which focuses on access and or abuse status of the girl or woman. The best work in the broadcast category will also win the VinMartin Ilo grant for investigative reporting.


The deadline for submission of entries is Friday, 24 October, 2014. Interested reporters may visit www.wscij.org for details of the 2014 award.