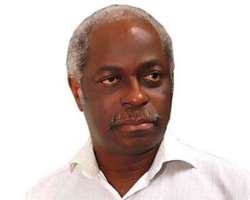 I went to apply for a visa at the American Embassy in Lagos.At that time, applying for an American visa was a major expedition. To make sure you were attended to, you had to get there as early as five o'clock in the morning. And then you might still be on the queue at midday. I had waited on the queue for several hours before I discovered that, in my hurry to get there on time, I forgot to bring the money for the visa. There was nothing I could do but go back home and return with the money the next day. But just as I was about to leave, the Holy Spirit told me to remain on the queue. He said: 'Femi, when you get into the Embassy, ask the person you sit next to in the waiting-room to give you the money.He will give it to you.'

To obey or not obey?
That directive only served to complicate matters. I said to myself: 'What exactly is the Lord up to? Why would an unknown person give me the money for my visa?' On the other hand, it was not inconceivable that I could meet an old friend or relation in the waiting-room. Habakkuk says the just shall live by faith. Accordingly, after a little reticence, I decided to stay on the line. When I finally went inside, the person next to whom I sat created even more confusion by immediately getting up and walking away. This made me wonder whether the Lord's plans had been scuttled. Nevertheless, I decided to move to the empty seat next to another perfect stranger.

Now came the difficult part. I had to ask him for money. That was unfamiliar territory for me. How do you ask a stranger for money? What would he think? Would he believe me if I said I had the money but forgot to bring it? Even if I really forgot, why not go back to get it and come back the next day? Can I tell a total stranger the Holy Spirit says I should collect the money for my visa from him without sounding like a con-man?

Divine set-up
I started to rehearse in my mind exactly what to tell him when, suddenly, it dawned on me. It was as if someone unexpectedly switched on the light. It was all a set-up. I had been set-up. In the twinkling of an eye, by the masterful stroke of providence, God had decided to teach me a lesson by turning me into a beggar.I never liked the intrusion of beggars.

They can be such a nuisance. They tend to violate your space, even when you are busy minding your business in your air-conditioned car.Children beggars are the worst. They sometimes put their lips against your glass window, leaving behind traces of saliva. Others specialise in pushing their deformities into your face. Should you refuse to look up from your newspaper, they will still not leave you alone. They will beg, sing and pray adamantly that the secret behind your wealth would remain hidden from the knowledge of the world. Why can't they just get a job for heavens sake? Or why can't a relation take care of them?

Reversal of Fortune
All the contempt I had for beggars now came to haunt me. There was I, a man of means with a not-so-secret disdain for beggars, constrained to join their ranks by asking a stranger for money. Moreover, I would not only be asking for small change but for a substantial visa-fee. Surely, if the stranger were to be as ungodly and uncaring as me, he would tell me to take a running jump into the lagoon. When I finally summoned up the courage, I began to recite my prepared speech. 'Please excuse me, sir. I don't want you to think I am trying to pull a fast one on you. But I was in such a hurry to leave the house this morning; I forgot to bring any money for my visa.' The man did not allow me to finish my laboured speech. He said: 'That's all right; I will give you the money.'

He answered me so readily; I was convinced he did not hear me. So I started all over again: 'What I am trying to say is that I was really in such a…' The man interrupted me again. 'I heard you the first time,' he replied. 'I said I will give you the money. You may not know this but I know who you are. Are you not Dr. Aribisala? Did you not use to work with Professor Bolaji Akinyemi at the Ministry of External Affairs?'