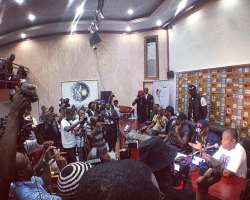 As the P-Square brothers get prepared for their concert in Cameroon, the country's fans have continued to shout in jubilation as if a hero just returned from a battle field.

Immediately the Team P-square got to the country, the press conference was held in Yaounde, the capital of Cameroon, to unveil their plans on the tour.

After the press conference, the duo had some picture moments before going to donate a cash reward and gifts to children at the orphanage home.