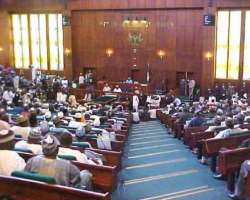 By Emmanuel Ogala
March 25, 2010 03:44AM
The Senate will on Monday, in a historical plenary, commence the screening of the ministerial nominees sent by Acting President Goodluck Jonathan. This is the first time the Senate will hold a plenary on a Monday.

Conventionally, the Senators do not sit on Mondays and Fridays, but the leadership of the Senate said it was necessary to break the convention and confirm the ministers in order to get the executive arm working, considering the limited amount of time left to the expiration of their tenure.

Last week, Mr. Jonathan dissolved the Executive Council of the Federation with a promise to re-constitute the council as soon as possible.

The screening would be a question and answer session between the nominees and the Senators. Screening ministerial nominees is the Constitutional duty of the Senate and it allows senators to ask the nominee questions and determine their eligibility or otherwise.

“Bow and go”
Nominees who do not meet the expectations of majority of the senators are usually dropped at this stage. Old hands are barely screened; they are usually asked to “bow and go.” The Senate is however, threatening not to use the “bow and go” screening method, even though their colleague, Bala Mohammed (ANPP, Bauchi State), is amongst the nominees.

Mr. Mohammed led the pressure group whose actions led to the unusual motion that empowered the Acting President to act while the president is on sick leave.

The senators also booed when the Senate President read through the list of nominees and mentioned “Sanusi Dagash”, who was a member of President Umaru Musa Yar'Adua's first cabinet, showing a sign of disapproval and perhaps, stormy weather for the nominee.

The list, which was received by the Senate on Tuesday but made public on Wednesday, has 33 names, nine of which were re-appointed.