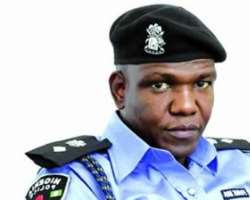 The bank robbery incident which occurred on Thursday evening in Modakeke, Osun State, claimed no fewer than 10 lives.

Armed robbers were said to have invaded two banks located in the town and carted away a huge sum of money.

Our correspondent gathered that 10 people, including two bank workers were shot dead during the operation.

Sources told our correspondent that the eight robbers arrived in the town in a vehicle and moved straight to one of the banks and started using explosive to pull down its wall while some of them shot directly at the security door to break it open.

A resident of the town told our correspondent that the people were killed during the operation which lasted for nearly one hour.

The resident explained that some bank workers were killed while passengers in a bus passing by were hit by the bullets fired by the robbers and some of them died.

The resident said although policemen came to the scene, they could not match the robbers who he said were better armed.

He added that the policemen, however, shot at the tyres of the vehicle brought by the armed men and demobilised them.

He said, 'The robbers came in the rain and opened fire on the bank. I closed my shop and ran away from the place. My neighbours also closed hurriedly because of the robbery.

'The whole town was thrown into confusion. The robbers threw explosive into the bank and that gave them access into the facility. They came after the closing hour and succeeded in carting away their loot.'

Another resident, who gave his name as Ola, said that the town was thrown into confusion as the hoodlums rained bullets on the bank.

He, however, said the robbers did not succeed in looting the bank, but killed some people.

Ola said, 'You know that robbers cannot steal from Modakeke, it is not possible. Some youths rose up and blocked the road and the robbers ran away. I cannot say if any of them was arrested.'

The Police Public Relations Officer in the state, Mrs. Folasade Odoro, said that six persons were killed during the operation.

'Six persons were killed and we are investigating the matter,' she said.

But the Public Relations Officer of the Nigeria Security and Civil Defence Corps in the state, Mr. Ayo Olowe, said 10 persons were shot dead during the robbery. Punch