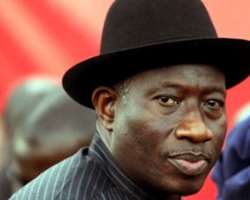 The Punch Newspaper, on December 9, 2013 reported that: 'Goodluck Jonathan on Sunday said Nigerian politicians lacked the virtues of great men and that none could be compared to the late former South African President, Dr. Nelson Mandela.'  Furthermore, it alleged the President said, 'Nigerian politicians were 'tiny men'.'  Odia Ofeimun, author and former private secretary to Chief Obafemi Awolowo, holds a different opinion on this issue, particularly, on the comparative importance of Obafemi Awolowo and Nelson Mandela. But that is an incidental issue to the thrust of this article, so, I would sidestep considering its factual merits or otherwise.

Recently, I was privileged to attend the Abuja International Men's Summit (AIMS), a faith-based programme with the theme 'the 360 man.'  The summit explored sundry issues related to contemporary men. It spotlighted male-typical attitudes, interests, struggles, and gender roles and relations in an ever-changing world, amongst others.  The insightful talks and lively discussions on the sideline of the summit elicited these questions in my mind. Who then is a real man? Where are the real men in Nigeria?

These questions were amplified in my mind as I recalled the above stated newspaper report, and a recent chance meeting with a childhood friend of mine, in Lagos.  After exchanging warm compliments, we spoke in a very desultory manner, like old friends do. At a point, I asked about her marital status. 'Single and fulfilled', she replied, elatedly. I was pretty puzzled by the novelty of her expression.  I went further and asked why she was still unmarried. She half jokingly and with a hint of magisterial stance said, because, 'There are no real men anymore, but little-minded boys parading in oversized bodies.' Frankly, I immediately dismissed her reply as the ranting of a victim of unrequited love.  But, I am having a rethink, considering the state of our nation and the President's verdict.

Tiny men are the antithesis of real men. In many ways, they are what real men are not. That is not to say, they are essentially effeminate or metrosexual. They are just bereft of manly behavioural qualities that underlie heroism, creative altruism and patriotism.  Real men subscribe to norms that humanise society and fulfil our collective aspirations of progress, while tiny men dehumanise public conscience and are impedance of egalitarian developments.

Self-centredness, which is the cradle of many society-destroying vices, is the quintessential mark of tiny men. Real men are we-minded. Tiny men are I-minded. They are so blinded by self-interest that, they make team building for national transformation almost impossible. Said differently, they are essentially motivated by the principle of 'what is in it for me.' What is in it for the people is to them what a red rag is to a bull.

It is this what-is-in-it-for-me orientation that makes them to trade their votes for rice. Their belly is their god. Ideals do not govern their political engagements. They always lend their support to the highest bidders. Their actions and inactions lend credence to the insightful observation of George Washington: 'Few men have virtue to withstand the highest bidder.' To them, voting in line with their conscience or canvassed social beliefs is a political taboo that perpetuates misery. In their article of faith, the pathway to enduring happiness and political relevance is to worship 'generous' looters of public funds, crown and present them as people's liberators and agents of mass empowerment.  Tiny men canonise the Lawrence Anini and ASP George Iyamu of this world, when they step into the political arena.

Tiny men are confidence tricksters. They have nothing but ploys in their political arsenals. When seeking political office, they present themselves to the public as saviours of the oppressed, lifters of the poor, friends of the people and visionary servant leaders. They drill boreholes here and there. Give handouts to the indigents in their constituencies. Cater to needy widows and award scholarships to enterprising students. To win the people's trust, they engage in all manner of social benevolences. But when in power, they betray the people's trust as their true nature comes to the fore.  They loot public funds. Entrench a culture of political hooliganism. Terrorise hapless road users with their convoys and sirens. Muffle dissenting voices. Status-enhancing service to the underclass becomes a taboo to them.  Real men possess power with self-control for public service; tiny men aggrandise it.

The soul of our nation is in turmoil, because, men are chasing vanities and paying tribute to mediocrity.  Real men tower over mediocrity. They entrench a culture of excellence in their respective spheres of influence. They live for noble purposes. No real man lives for nothing.  They enrich the history of the world with visions of hope and inspiring accomplishments, regardless of their stations in life.  As long as men in strategic positions of influence keep behaving like boys in oversized bodies, screaming to have ice-cream for breakfast, our collective future will remain endangered to the harmful influences of woolly thinking and mediocrity.

Men are the main architects of the impedimental challenges facing Nigeria. For politics is almost their exclusive domain. Given the huge gender gap in the political sphere, Prof. Chinua Achebe's famed postulation: 'The trouble with Nigeria is simply and squarely a failure of leadership' implicitly implicates men. Also, the fact that ours is essentially a patriarchal society buttresses the plausibility of this claim. Here, we have a system of pseudo rule, which is largely of men by men and for men. In fact, leadership failure is a footnote in our long history of men's failure to embody power with grace, control, and good judgment.

Real men dignify labour and shun the paths to ill-gotten wealth. They know that diligence is the epicentre of a happy life, not corruptly amassed wealth. When a society fails to underscore the fact that, good fortune is a mirage without diligence, straw men will articulate the fundamental canons of its worldview.  If we fail to extirpate the roots of corruption and promote good work ethics, our quest for a transformed Nigeria will be a stillborn vision. Religious leaders being moulders of public conscience have a duty in this regard. They should endeavour to promote the understanding that 'He who sows the ground with care and diligence acquires a greater stock of religious merit than he could gain by the repetition of ten thousand prayers.'

Real men are defenders of the weak. They draw strength from strengthening the helpless and decrying all forms and acts of injustices.  Unlike tiny men, their power is not derived from trampling on the rights of the powerless.  They do not exploit the primordial fears of people in order to attain political stardom.  Again, they do not impoverish victims of economic servitude in a bid to amass wealth. Their fight against everything and anything anti-poor is beyond rhetoric.

Clearly, tiny men in power lack a fine understanding of the purposes, principles and dynamics of power. They seek power to sate their unbridled libidos. Like King Solomon, they use the privileges and perks of office to increase their wives and kept women. The difference is that Solomon had the common decency not to succumb to the allures of underage girls. Some of these tiny men cannot resist the vulgar taste for the body of underage girls.  They turn their protocol officers to glorified pimps. The rich ones go to North Africa hunting for teenage brides. The not-so rich nocturnally go to university campuses to exploit poverty-stricken teens. Real men do not get consumed with the thought of sleeping with underage girls or their secretaries, because, they greeted them good morning with a warm smile. They know heartfelt greeting is not an indication of romantic interest or a precursor to intercourse.

Reflection is the springboard of regeneration. Nigeria's quest for far-reaching transformation will remain as elusive as a beggar's wish, if men fail to put on their thinking caps, change their mode of conduct for good and stop playing the politics of division. Real men build bridges across divides, while tiny men build walls that divide. Nigeria's inter-tribal relations need healings. Only real men can administer the needed balm.

Evidently, tiny men cannot move Nigeria forward, their continuous dominance in politics, which thrives on popular apathy, endangers our collective prosperity and unity. The responsibility to usher in men of merit to the corridors of power rests on each and every one of us.  We must not allow tiny men who play the politics of divide and rule to plunge us to the dark craters of ethno-religious violence, economic stagnation and political repression.  As long as it cannot be said of tiny men that like a compass needle that points north, their guiding hands always find the path of nobility, progress, peace and unity, they should not be entrusted with the noble of business of steering state affairs.