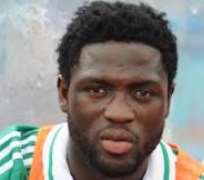 Super Eagles Coach, Stephen Keshi, says striker Michael Babatunde is undergoing surgery for a broken arm after being hit by a ball struck by a teammate in their World Cup match against Argentina today.

Babatunde was stretchered off the pitch in a 3-2 defeat which did not prevent Nigeria from advancing to the second round from Group F.

Asked whether Babatunde might play again in Brazil, coach Stephen Keshi said: “We will see how it goes, but it's not good.”

Babatunde, who plays for Ukrainian team Kryvbas Kryvyi Rih, was a surprise pick for the national team.

Nigeria will play the France in the last 16 on Tuesday. ONE NEWS