Jennifer Lopez flirts with Chmerkovskiy after shooting down dating rumors 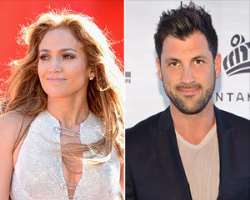 Still just friends? Weeks after they shot down dating rumors, Jennifer Lopez and Maksim Chmerkovskiy met up for a “very flirty” night on the town. The Dancing With the Stars pro, 34, attended Lopez's show at Foxwoods Resort Casino in Connecticut on Saturday, June 21, after which he and the “First Love” singer, 44, danced the night away at Shrine Nightclub.

PHOTOS: Jennifer and Casper Smart, the way they were

An onlooker tells Us Weekly that the two stayed close for most of the night, talking and dancing together in a big group. “Maks was whispering into her ear and hugging her,” the eyewitness says. “They looked very flirty with each other…She had a huge smile on her face and looked like she was having a great time.”

PHOTOS: J.Lo's hot body evolution
The source notes that Chmerkovskiy, who won season 18 of DWTS with partner Meryl Davis last month, remained by the recently single star's side even when he wasn't dancing. Lopez, meanwhile, was super into the music and grooving to songs including Jay Z 's “99 Problems,” Rihanna 's “Birthday Cake,” and French Montana 's “Pop That.”

PHOTOS: J.Lo's love life
At one point toward the end of the night, the two held hands and talked before sharing a long hug and saying goodbye. Chmerkovskiy then left with a male friend, while Lopez stayed behind with the rest of the group.

The “I Luh Ya Papi” hitmaker—who split from longtime boyfriend Casper Smart earlier this year—first met the DWTS veteran through her good pal Leah Remini . They later shared the stage at the 2013 American Music Awards, and then hung out at the Library Bar in L.A. back in March, when Chmerkovskiy's brother Val celebrated his birthday.

PHOTOS: J.Lo's best hairstyles
Multiple sources told Us Weekly , however, that the relationship is platonic—for now, at least. “They are friends,” one insider said of Lopez. “She doesn't have a second to date anyone right now, and it is definitely not romantic with Maksim.”

A rep for Chmerkovskiy did not respond to requests for comment.