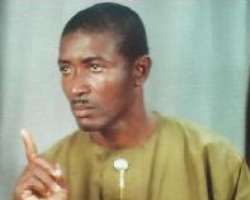 As we approach the 2015 general elections in Nigeria and as Human Rights Activists prepare to observe the observance of Human Rights by power holders and seekers, we, the undersigned, wish to draw the attention of Ndimo, Ndigbo, Nigerians and the international community to the clear and present danger of subtle intimidation, gagging and harassment of citizens through the violation of their basic rights and denial of justice.

We the entire Human Rights and Anti-Corruption Advocates in Imo state have received this worrisome signal through the way and manner in which allegations are levelled against Human Rights advocates as a strategy to psychologically weaken and humiliate them and to silence others who may want to speak up against impunity for corruption and abuse by those in power.

A case in point is the one involving Citizen Samuelson Iwuoha, the immediate past Special Adviser to the Speaker of Imo state House of Assembly who has been held in police custody in Imo state since he was arrested on the 3rd of June 2014 over yet to be proven allegation of murder.

We received information that Citizen Samuelson Iwuoha was arrested and detained by the police alongside twenty one others, after someone was found dead along the street where he lives in Ikenegbu Layout area of Owerri, Imo state. We expected the Police to have charged Citizen Samuelson Iwuoha to court within the time duration mandated by the law. He is entitled under the law either to be freed on bail or charged to court rather than be held indefinitely. His rights to liberty and due process, including presumption of innocence are being flagrantly and recklessly trampled upon by the police and those who may be behind this saga.

The Human Rights Community in Imo state is shocked that after 13 days in unlawful detention, Citizen Samuelson Iwuoha, his wife, the house (who is a minor) help to his elder brother and a bricklayer who was hired to work for them have been in detention while the rest have been released on administrative bail.

Till today, the Imo state police command has not given any reason as to why Citizen Samuelson Iwuoha, his wife, their bricklayer and their house help- a minor, cannot be either released on administrative bail or charged to court after the expiration of the stipulated maximum number of days the law permits the police to detain anyone accused of a crime under the law.

While Citizen Samuelson Iwuoha insists that the allegation against him, his arrest and detention are politically motivated, activists in Imo state are seeing it as a sign of impending clampdown on them because what happens to one affects all. The only way this fear can be assuaged is for the police to be guided strictly by the law in the discharge of their responsibility regarding the allegation against Citizen Samuelson Iwuoha.

We recall that during the ill-fated regime of Chief Ikedi Ohakim in Imo state, Citizens Samuelson Iwuoha, was brutalised by the Governor's security aides and finally flogged black and blue by the then Governor himself, in his office. That was the height of direct Human Rights violation by a governor as well as the highest scandal of that time.

Citizen Samuelson Iwuoha was later, hurriedly charged with frivolous offences and remanded in Owerri Prisons for over one month before reprieve came his way via a court order.

As the then government of Ohakim was sent parking, and with a solemn promise by incumbent governor Rochas Okorocha during his inauguration that no innocent citizen in Imo will suffer unjustly, Human Rights activist and social critics were of high hopes that harassment and intimidation now belonged to the better forgotten past in the history of Imo state. Today, it appears that the monster of human rights abuse still leaves with us in Imo state. While the current governor did not flog Citizen Samuelson Iwuoha or send his security agents to do so, as the chief security officer of the state, he is vicariously responsible for any violation of the right of any Imo citizen that he was elected to protect. This is why he should ensure that the police do the right thing and to act in accordance with the due process and rights of all concerned.

While Imo state activists cannot condone illegality or crime committed by any person, whether activist or non-activist, we believe that everybody must be treated as the law prescribes and every citizen's rights guaranteed under the law must be respected. The police and other law enforcement agencies must be prepared to accord to all citizens their constitutionally guaranteed human rights as we are no longer under a repressive military regime.

We therefore make the following demands:
Citizens Samuelson Iwuoha and his family should be immediately released or charged to court if the police have credible evidence against him and his family.

All citizens who have been held in police detention for more than the legally permisible duration of not more than 48 hours at the most should also either be released or charged to court without further delay.

That the Imo state police command under Mr. Abdulmajid Ali should show good examples in conduct and performance if they have to win citizens' confidence and support in the discharge of their constitutional duties including fighting crime. They must treat citizens as the law prescribes.

The government of Imo state should ensure that the police in Imo state protect the right of every citizen, especially activists in the course of discharging their roles of crime detection, prevention and control.

The Imo state Police Command should strive to apply the global best practices in policing by obtaining sufficient evidence before arrests are made or fast-tracking investigation so that suspects are charged to court within reasonable time as prescribed by the law.

While we believe that the police should stay away from politics and act as guardians of the rule of law, they must demonstrate their impartiality through their conduct and the way they handle matters suspected to have political undertone.

It is the duty of the police to ensure that the rights of all are protected under any circumstance.

For: Democracy and Development Vanguards, Owerri

Network on Police Reforms in Nigeria