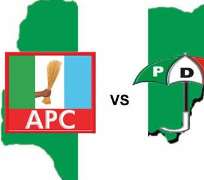 No fewer than 1,000 members of the ruling All Progressives Congress (APC) in Kwara, on Sunday in Ilorin defected to the People's Democratic Party (PDP).

The defectors who were from the seven wards in Ilorin West Local Government Area, were received by Alhaji Mustapha Isowo, State Vice chairman (Central) of the PDP, at Alore in Ajikobi ward, Ilorin.

Isowo expressed happiness that new members took the courage to leave APC for PDP and assured them of equal treatment.

NAN reports that defectors surrendered their APC membership cards to Isowo who gave them PDP cards in return.

Isowo advised the new members to register as voters when voters' registration commence in the state.

He assured the new members that with PDP, they would actualise their dreams and aspirations, adding that “PDP is the only party in the country owned by the people.”

Ajadi Abdulfatai, leader of the defectors, who spoke, said they left APC because their expectations were not met.

“When we joined APC, we thought that there would be a lot of dividends of democracy for us.

“We thought we would enjoy fair play and justice, but the reverse is the case, that is why we are joining PDP,” Abdulfatai said.

According to him, his people have seen that PDP has men and women who are God-fearing, serious and poised to wipe away tears from the faces of the masses.

“So, we have brought out our members from the seven wards of Ilorin West Local Government Area for a start”.