Injection Drama: I can't risk my career for World Cup—Ribery 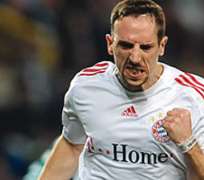 (AFP) - France's star winger Franck Ribery said Saturday he refused a cortisone injection that French experts claim could have saved his World Cup place because he believed it was bad for him.

Ribery's comments deepened a battle between the French camp and Bayern Munich on the eve of the country's opening World Cup Group E match against Honduras.

'It's not good,' Ribery said of the cortisone steroid injection that French team doctor Franck Le Gall had wanted him to take to ease his crippling back pain.

Le Gall said on Thursday that Ribery had withdrawn from the squad because he was afraid of injections.

The Bayern Munich and German national team doctor Hans-Wilhelm Muller-Wohlfahrt retorted the next day that Ribery would be playing at the World Cup if France had used his calf's blood extract. The product used by the German doctor is banned in France.

The 31-year-old Bayern winger said he had simply refused the cortisone injection.

'I am not scared of injections. But I did not want to be injected with cortisone by the French doctor,' Ribery told the SID sports agency of Germany, an affiliate of AFP, in a written statement.

'You can believe me,' he said 'my career is going to continue longer' without the cortisone.

Muller-Wohlfahrt is currently on duty with the German team at the Brazil World Cup.

'It is injust. I cannot accept the criticism of Dr Muller-Wohlfahrt,' said Ribery.

'I have been at Bayern for seven years and and I have complete trust in 'Mull',' he added.

'He has always helped me. He does things correctly. Without him I don't know if I would be playing football as I do. It is the same for Arjen Robben', the Bayern and Netherlands winger.

'He has been injured so often and he owes it to Muller-Wohlfahrt that he can play without problems now and has started the World Cup in such a sensational way,' Ribery said.

'That, we — and a lot of other players as well — owe it to Muller-Wohlfahrt.'

The German doctor sent the French team all the documents about Ribery's injury and also offered to treat him, Ribery said. 'It was refused,' he added.

Le Gall said that Bayern Munich used too many injections in its treatment of players and that this had made Ribery 'afraid of injections.'

Muller-Wohlfahrt, one of the world's leading sports medicine specialists, who has treated sprinter Usain Bolt among others, answered Friday in a statement released by his lawyer.

Muller-Wohlfahrt has made his name using Actovegin, a highly filtered extract from calf's blood.

Actovegin is allowed by the World Anti-Doping Agency.The product is banned in France.