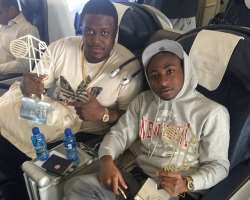 21 year old Davido performs at least 3 shows per week in Nigeria, if his brother's tweet is to believed, the artiste is easily taking home at least $150,000 per (N24 Million) week from showsthis does not include endorsement deals and revenue from album sales.

At this rate Davido is definitely one of the top five earning entertainers in Nigeria!