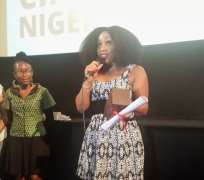 Nollywood Week Film Festival, which was held in Paris, France, from June 5 to 8, 2014, ended on a good note for star actress, Rita Dominic and Mildred Okwo, as their 2012 blockbuster movie, 'The Meeting', won the Audience Award for the best film.

The event was well attended by top Nollywood actors, directors, producers as well as the media, international investors and creative artists. Also, in attendance were the directors and actors whose films were screened at the festival.

Rita Dominic was presented with the award at the closing ceremony of the festival and she stepped out in an 'Ankara' dress, which was styled with a black belt and black pumps.