New Emir of Kano, Sanusi Lamido Sanusi Clamour’s For #Bring Back Our Girls 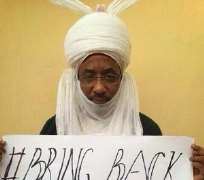 What a better way to start his newly assumed position as the Emir of Kano, as Sanusi Lamido Sanusi has also joined the placard carriers of '#bring back our girls.'

Sanusi's assumption of office as the new Emir has been receiving wide criticisms and even, a protest was held after he was picked as the rightful person for the seat.

Kano metropolis is now calm after initial protest by supporters of Sanusi Ado Bayero who failed to get the nod of the city's kingmakers and the state government to emerge as new Emir.

The supporters of Mr. Bayero had set off bonfires in various locations after the Secretary to state government, Rabiu Bichi, announced that the former Governor of the Central Bank of Nigeria, Mr. Sanusi, had been selected.

Recall that President Goodluck Jonathan had ordered the suspension of CBN, Sanusi Lamido Sanusi, on Thursday, Feb. 20, 2014; weeks after the CBN Governor exposed the theft of at least $20 billion by officials of Nigerian petroleum ministry.