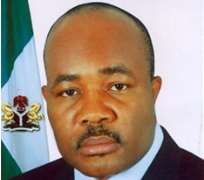 Akwa Ibom (AI) State Governor, Mr. Godswill Akpabio, plans to be a Senator by this time next year. The constitution bars governors from a third term in office, and a Senate seat has become the political destination of choice for graduates of that office.

That Mr. Akpabio will get his wish is hardly in doubt; an outgoing governor is rarely troubled by another contestant or the electoral commission if he wants such an office.

The Senate is a good place to rest, and to hide, after the exertions of the gubernatorial chair. Since a president such as we have at the moment requires regular diaper changes and a feeding bottle, a Senatorial chair is the best way for a former governor-whether he has been a looter, child abuser or a murderer-to guarantee his political survival.

History shows that the Nigerian Senate has been very effective in that regard. In his case, Mr. Akpabio is doing it differently: he is forcing the people of AI to keep him in luxury and great style for as long as he lives.

He got his wish in one week. Here is how: On May 15, two weeks ago, he sent to the House of Assembly a bill he called the Akwa Ibom State Governors and Deputy Governors Pension Bill 2014.

He told the Assemblymen to pass it right away, no later than June 1. The Assembly, in unison, said two words, 'Yes Sir!'

Actually, the Assembly saw the bill on May 19, four days after its arrival. There are many literate people in the AI Assembly, but none of them bothered to read the bill in anything other than a formal sense, as Akpabio had been greasing his path for a long time. Whatever Akpabio wants, the Assemblymen thought, Akpabio gets.

And so, on May 27, just one week after the bill appeared in front of them, the Assemblymen said to the governor, 'Yes Sir!!'

And he wanted to rob every Akwa Ibom child in perpetuity, and enslave his potential to any looter who has the ruthlessness to travel through its governorship.

How did he do it? First, he assembled a band of shameless legislators.

From them, Akpabio demanded, and received approval for an annual pay of N200 million for the governor (with slightly smaller provisions for the deputy governor), at the rate of a monthly pension for life equivalent to his current salary.

Akpabio demanded, and received, a 5-bedroom mansion in Abuja or Akwa Ibom for the Governor and a yearly accommodation allowance of 300 percent of annual basic salary for the deputy governor; the construction of a mansion as a retirement home and furnishing.

He demanded, and received, brand new cars for as long as he lives.

He demanded, and received, up to $50,000.00 per month allegedly to hire cooks, chauffeurs and security guards.

He demanded, and received, free medical services for himself and his spouse 'at a sum not exceeding N100 million or an equivalent of $600,000.00.'

To be fair, a few other states in Nigeria have similar laws, aimed at providing for former chief executives once they are out of office. None, however, is as callous, greedy, self-serving or dangerous as Akpabio's.

Any Nigerian who has paid attention knows that Mr. Akpabio is pretty free with public funds. He is the poster-boy for the gubernatorial jet set, one of those who lead the way in the buying and renting of lavish executive jets allegedly for business. Only three months ago, a report emerged that he has lavished $10 million in the charter of one such jet from a Swiss firm, spending close to $400,000 per day during the charter.

In the past seven years, Governor Akpabio has also become widely-known for his reckless donation of public funds and gifts at private events. He loves to travel with large caches of cash, and to get high by donating expensive cars everyone knows to have been bought with public funds.

Beyond politicians and artistes, some journalists are known to have benefited from his warped generosity, and the only thing worse than a governor willing to divert the public purse in order to look good is a journalist happy to collect such bribes to pay his children's school fees.

In a political culture where the objective was service of the people, the road ahead would have been clearer, even if the road back were murky. It is the Akwa Ibom State House of Assembly, in the interest of the people, which would have sought to control Akpabio's gubernatorial extravagance.

By doing so, the Assembly would have been fulfilling its constitutional duty to ensure not only that public funds are not squandered recklessly by the governor or anyone else, but that they are devoted into serving the people.

The problem that Akwa Ibom illustrates is that it is difficult to identify who is now on the side of the people. The legislature is in bed with the governor in a political polyandry in which, somehow, either side can make the other pregnant. Together, they have taken sides against the people, having determined that paramount promotion and protection of the powerful matter take precedence over the perpetual privation of the people.

The question as to who is on the side of the people of Nigeria has come full circle with a president who says he 'does not give a damn' about leading by example, and has proved he only gives speeches about the welfare and security of its children. Neither he nor anyone else in high office has the moral authority to challenge the Akpabios.

The National Assembly, led by the corrupt, protects the corrupt. It is difficult to imagine what else we are to expect, given that our laws are being baked by the Akpabios, who live in opulent mansions in an ethical Sambisa forest.