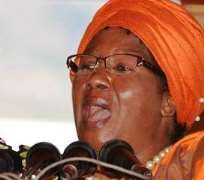 Malawian President Joyce Banda congratulated her arch-rival Peter Mutharika on Saturday after conceding defeat in the country's presidential election, following her challenge to the result.

Banda congratulated Mutharika for his 'victory in a closely contested election' and said she was 'leaving office a happy person,' according to a statement.

Mutharika, leader of the Democratic Progressive Party,was Friday declared winner of Malawi's disputed presidential election after garnering 36.4 per cent of the votes cast.

The electoral commission said Mutharika, brother of former president Bingu wa Mutharika came ahead of Lazarus Chakwera who obtained 27.8 per cent of the vote and outgoing president Joyce Banda who garnered 20.2 per cent.

Mutharika is 74 years old.
The result was announced after Malawi's high court Friday refused to delay the release of results of the country's disputed presidential elections for a recount.

'The law is clear, there is no extension,' said high court judge Kenyatta Nyirenda.

The ruling cleared the way for the electoral commission to release poll results by the legal deadline of midnight (2200GMT) Friday.

President Joyce Banda shown in early results last week to be running third had claimed the vote was marred by 'serious irregularities' and declared it 'null and void'.

The court case calling for a recount was initiated by the Malawi Congress Party of former dictator Kamuzu Banda after the early results showed their candidate, Lazarus Chakwera, in second place.

The election in the tiny, poverty-stricken southern African nation was dogged by controversy from the start, with some polling stations opening 10 hours late and some voting stations recording more votes than there were registered voters.