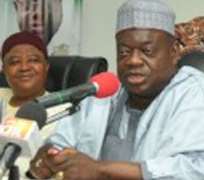 The Northern Governors' Forum has expressed shock and disbelief over the killing of Emir of Gwoza, Alhaji  Idrisa Timta, and the assassination attempt on the Emir of Uba, Alhaji Ismaila Mamza and the Emir of Askira,  Alhaji Mai Abdullahi Ibn Muhammadu Askirama by Boko Haram sect.

The emirs, all first class from Borno State, were said to be travelling to Gombe State to attend the funeral of the Emir of Gombe, late Alhaji Shehu Abubakar, who died earlier in the week in a London hospital, when they were ambushed and attacked by a group suspected to be Boko Haram members.

Chairman of the Forum and Governor of Niger state, Babangida Aliyu in a press statement signed by his Chief Press Secretary, Israel Ebije and made available in Minna Friday, condemned the attack, calling it a war on the traditional institution.

'We call on the leadership and entire members of the Boko Haram sect to embrace the amnesty offer promised by President Goodluck Jonathan. Dialogue remains the best option for resolving issues,' the statement said.

Aliyu urged Nigerians not to lose faith in the country's capability to overcome its security challenges and called on security operatives to ensure that those behind the dastardly act are caught and punished.

He called on Nigerians not to give in to despair in view of the unpalatable occurrences and urged them to remain calm and pursue their legitimate activities, adding that government would do everything possible to guarantee the safety of lives and property.