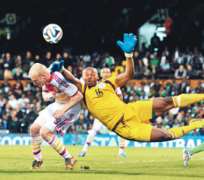 The Super Eagles began the preparations for the 2014 World Cup with a 2-2 draw against Scotland on Wednesday at the Craven Cottage in London.

The African champions rested key players like Mikel Obi, Vincent Enyeama, Emmanuel Emenike and Ahmed Musa for the match against the Tartan Army who were unbeaten in their last five outings.

The match began slowly with Shola Ameobi and Michael Uchebo troubling Allan McGregor in goal for Scotland. The Scots grew into the game as the match progressed with Nigerian-born Ikechi Anya bursting down the flanks to trouble the Nigerian defence.

Substitute Uche Nwofor rescued Nigeria from defeat with a late goal after the Scots held on to a 2-1 lead with few minutes left in the match. Charles Mulgrew gave Scotland the lead after just 10 minutes when he deflected James Morrison's effort beyond Ejide in goal for Nigeria. Eagles levelled in the 40th minute when Uchebo's shot from distance was also deflected and goalkeeper McGregor was wrong footed.

Scotland regained their lead in the 52nd minute when Egwuekwe scored an own goal but Nwofor snatched a late equaliser to save Nigeria the embarrassment.

Scotland coach, Gordon Strachan, told BBC Radio after the match that the game was an even and fair one.

He said, 'We've had three days hard work and we were one pass away from another three or four goals. Some of these guys haven't played in weeks and I think you could see that in a few of the final balls.

'I've got a squad in there where every one of them wants the others to do well.' BBC