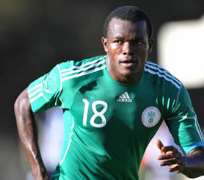 West Ham United have been dealt a blow in their pursuit of signing Obinna Nsofor from Lokomotiv Moscow as the Nigerian striker prefers a move to Serie A.

The 27-year-old was on loan at Chievo Verona from January this year and impressed in his brief spell with the Italian club.

Nsofor's future at parent club Lokomotiv is in serious doubt with the player deemed surplus to requirements at the Russian club.

The Nigerian spent the 2010-11 season on loan at Upton Park and the Hammers are interested in signing the forward due to a campaign in which their strikers have disappointed in front of goal.

However, the player himself has stated that he prefers to seal a permanent switch to Chievo where he has enjoyed his time with the club on loan.

'After Brazil (World Cup), we'll see if Lokomotiv want me or I remain here. President Campedelli knows what I would prefer, but they should talk with him,' Nsofor told Italian daily newspaper Il Corriere del Veneto .

A number of other clubs are also said to be courting Nsofor but his future is expected to be decided after the World Cup ends.