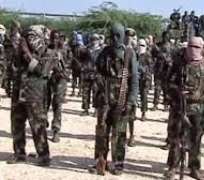 Suspected Islamist gunmen opened fire on a market in a Nigerian village on Sunday, killing 20 people in the latest violence against civilians in the northeast of Africa's top oil producer.

The assailants surrounded the village of Kamuyya, a military source based in the nearest town told Reuters. The militants shot people as they gathered to trade in its open air market.

Villages in Borno state, the epicentre of Boko Haram's violent campaign to carve an Islamic caliphate out of religiously mixed Nigeria, have been under almost daily attack.

Boko Haram made world headlines when it claimed the abduction of more than 200 school girls from the village of Chibok last month, prompting international outrage and persuading President Goodluck Jonathan to accept foreign help to try to free them, including a team of around 80 U.S. troops deployed to neighbouring Chad, and surveillance drones.

Since the girl were snatched on April 14, at least 470 civilians have been killed by the insurgents in various attacks, according to a Reuters count.

A spate of bombings across north and central Nigeria has killed hundreds, including two in the capital Abuja and one in the central city of Jos on Tuesday that killed 118 people.

A suicide bombing on Saturday that was meant to strike an open air viewing of the Champions League soccer final match in the central Nigerian city of Jos killed four people but failed to hit its target, the National Emergency Management Agency said.

Nigerian President Goodluck Jonathan travelled to South Africa over the weekend, his office said, to discuss ways of tackling Islamist militancy across the continent with African heads of state.

The meeting 'defined a stronger framework for cooperation among African states to deal with this menace', presidential spokesman Reuben Abati said, giving no details.

A presidential team tasked with locating the girls returned from Borno state to the capital Abuja on Sunday, they said in a statement. It did not say if any progress had been made. (Reporting by Lanre Ola; Writing by Tim Cocks; Editing by Alison Williams)