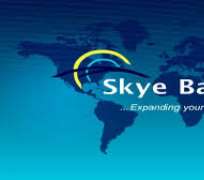 Skye Bank Plc has boosted its capital with $150 million sourced from Development Finance Institutions (DFIs) based in Europe.

Thursday disclosed that it has raised about $150 million tier-2 capital.

The bank's Group Managing Director designate, Mr. Timothy Oguntayo, said at a media briefing in Lagos on Thursday the faicility would better position the bank to take opportunities in the system.

According to Oguntayo, tier-2 capital is like a loan to the bank and has a maturity of not less than seven years.

'So our tier-2 capital raising is going as planned and should be available for us to use by the second half of this year,' Oguntayo explained.

Speaking on the strength of Skye Bank, he said the commercial bank is notable for its leadership in e-channels. This, he maintained it had demonstrated over the years.

According to Oguntayo, the bank has one of the best and efficient Automated Teller Machines network in the country.

'We have also distinguished ourselves in the area of real estate development and oil and gas. Beyond that, we are known for good relationship management.  In partnership with our customers, we go the extra mile in ensuring that they are satisfied.

'We have been ranked seventh in the industry across different indices, and that is coming from about 13th position. So we have made modest achievement over the years,' he said.

Going forward, the Skye Bank boss said the bank would increase its focus on both the commercial and retail segments of the market. This, he pointed out would enable it increase its support to the real sector of the economy.

In order to successful achieve its objective; he said the bank recently carried out a branch categorisation exercise.

'About 52 branches have been designated retail branches that would service savings customers. We also want to increase our support to individuals.

'Our focus is also on the commercial banking space. I think we have done enough in the high end of the market. We need to percolate down to the lower end of the market which is mostly SMEs and individual businesses,' he explained.