Charlie Sheen goes off on Rihanna after restaurant snub 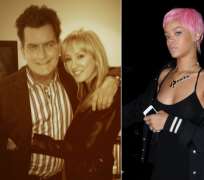 We haven't read warlock words like this in a while.

Using the TwitLonger app, Charlie, 48, chastised the 'We Found Love' singer , 26, for not coming over to say 'hello' and meet his fiancée, Brett Rossi ( soon to be Scottine Sheen ), 24, while the two dined at the same Santa Monica, California, restaurant as RiRi.

In his post, Sheen explained that he had taken his gal to dinner at Giorgio Baldi for her birthday, and when they heard Rihanna was also there, he sent over a request to her table asking to meet the pop star as his girlfriend is a huge fan. (He made sure to point out that he 's not a fan)

But the actor got word back that RiRi who was dining with her best friend, Melissa Forde felt a meet-and-greet wouldn't be feasible in the small space as there were too many paparazzi outside. Naturally, that did not sit well with Charlie.

'Nice impression you left behind, Bday or not,' he wrote. 'Sorry we're not KOOL enough to warrant a blessing from the Princess. (or in this case the Village idiot).'

He then proceeded to explain that he's lasted 31 years in 'the biz' because he's learned 'Good will and common courtesy' along with 'a code of gratitude!'

Then things got personal when he called out her new pink 'do.

'Halloween isn't for a while,' he added, 'but good on you for testing out your costume in public. it's close; a more muted pink might be the answer, as in: none.'

Sheen concluded, 'See ya on the way down, (we always do) and actually, it was a pleasure NOT meeting you. clearly we have NOTHING in common when it comes to respect for those who've gone before you. I'm guessing you needed those precious 84 seconds to situate that bad wig before you left the restaurant Here's a tip from a real vet of this terrain; If ya don't wanna get bothered DONT LEAVE YOUR HOUSE! and if this 'Prison of Fame' is soooooooo unnerving and difficult, then QUIT, junior!'

Ouch! Maybe Rihanna and Chuck Lorre should get together and commiserate over being on Sheen's target list?

Of course, Rihanna was quick to respond:
Goooorrrrrrlllllll
Rihanna (@rihanna) May 22, 2014
If that old queen don't get ha diapers out of a bunch