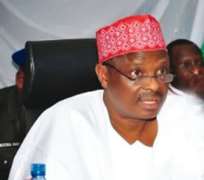 The Peoples Democratic Party (PDP) has said the Governor of Kano State, Alhaji Rabiu Kwankwanso, is not fit to govern at any level.

Speaking on behalf of the party at a press conference in Abuja on Thursday, the National Secretary of the party, Prof. Wale Oladipo, said it was fortunate that Kwakwanso could describe some governors in the PDP as vultures.

He said the governor of Kano State, who was a former member of the party until he defected to the opposition party, All Progressives Congress, was wrong in pouring vituperations on President Goodluck Jonathan and governors elected on the platform of the ruling party.

Oladipo also said that of particular note was Kwankwanso's direct attack on the Chairman of the PDP Governors' Forum, who is also the Governor of Akwa Ibom state, Godswill Akpabio, and other governors who accompanied the President to the PDP unity rally in Kano State recently.

He added that while the PDP recognised the inalienable right of citizens to hold opinions and identify with political platforms of their choice, he said the PDP found it difficult to understand the type of bitterness that had taken hold of Kwakwanso.

The PDP secretary said, 'Ordinarily, we would have ignored this confused and frustrated governor who now swings on the brink of nervous collapse following his rejection by the people, but in the interest of the nation and our teeming supporters, we are persuaded to post this response, put the records straight and expose the real intentions of Kwakwanso.

'It is very shocking that an elected governor could show his inability to manage his political failures and miscalculations by condescending so low to attack governors from a section of the country even to the extent of describing his own colleagues as 'vultures.'

'This is indeed unfortunate and clearly shows him as an uncultured and ill-bred person completely unfit to govern at any level.'

He said with the attack, Kwakwanso had not only shown his aversion to the unity of the nation but that of of his party to attack well-meaning individuals and leaders as a means to cause confusion among Nigerians and destroy the nation's unity.

He said that if there was any person that should be described as a vulture, 'it is Kwakwanso, who is now in a political waste bin called APC, scavenging for power. This is a man who, driven by an insatiable appetite for power has resorted to casting dirt at the same institution that made him.'