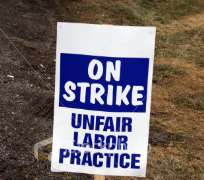 According to the General Secretary of the Union; Mr Aderemi Ajagbe,the strike was declared on 27th March,2014 following some local contention like payment of certain allowances most especially Hazard and Medical allowance to all members of the Union.

However, consequent on the satisfactory resolution reached by the conflicting parties, the union suspended the strike on 6th May 2014, thereby returning life and progress to the Campus.