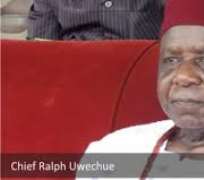 An Igbo youth group has accused Arewa Consultative Forum of working to stall the creation of a sixth state for the Southeast geopolitical zone, which has been agreed by the committee on devoltion of power.

The southeast zone is the only one of the six in the country with only five states. All others have six each.

The people of southeast, which often cite the disparity as one clear case of marginalization of the zone, have been putting up strong efforts to mend the anomaly.

The Igbo youth group in a statement on Wednesday said it was surprised by the palpable unfriendly disposition of the ACF to people of the southeast zone.

The statement by the National Leader of Ohaneze Youth Wing, Mazi Okechukwu Isiguzoro, reads as follows:

It was with shock and disbelief that the Igbo youth as represented by the Ohaneze Youth Wing read with the statement credited to the Arewa Consultative Forum (ACF), aimed at inciting the northern delegates at the on-going National Conference to vote against the core demands of Ndigbo at the conference, i.e. a Sixth state for the South East and recognition of zones in the constitution as federating units.

1.      If the statement is true, then the Arewa Consultative Forum (ACF) has taken a line of aggression against the Igbo nation, exhibiting a tacit systemic arrogance that amounts to total disrespect and lack or love for Ndigbo and therefore should not expect same from us.

2.      It portrays the ACF as a group that has for long benefited from the structural marginalization of Ndigbo in the Nigerian project, and are willing to go to any length to maintain the tilted status quo.

3.      Therefore, the Arewa Consultative Forum (ACF) is ungrateful to Ndigbo for having selflessly protected their interest in the past; Nigerian independence was postponed by 2 years at Zik's request to enable our 'Northern brothers' to be ready. It was largely Igbo senators especially Chief Ken Nnamani, the then Senate President and Senator Uche Chukwumerije that shot down the 3rd Term Agenda at the National Assembly in 2006.

4.       Their assertion that the South East does not have enough land mass to ask for a sixth state is ridiculous since large land mass does not always imply large population. After all, most states in the Far North are as sparsely populated as the Sahara Desert. Had the Festus Odimegwu census approach been allowed to fruit, we would have known the true Nigerian figure.

5.      It will be hypocritical to refuse to assign the 6 zonal structure a constitutional role since it has conventionally become part of Nigeria's political structure. In fact, delegates to the conference were nominated with respect to their geo-political zones.

6.      It is equitable that the zones should be the federating units rather than the states. The states need to aggregate resources so as to be econo-politically strong enough to counter balance the Federal Government politically. It will also enable them to execute mega infrastructural projects such as refineries, regional highways/ monorail network, etc which many individual states cannot afford.  This has led to the current trend towards regional integration by most zones.

7.      Consequently, we wish to re-affirm the stand of Ohaneze Ndigbo that 'power shall go from the South South to the South East, in unbroken succession.'

8.      Finally, we wish to also state that we are watching the unguarded vituperations of some northerner elements, especially the recently released memo of the Adamawa State Governor Rear-Admiral Murtala Nyako which is aimed at re-enacting the infamous pogrom of the late 1960s; we are aware of these antics, but they should also be knowledgeable enough to know that the variables of 1966-1970 have changed both internally and externally.