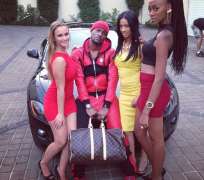 Reports reaching us has it that Kukere crooner, Iyanya, was almost left dumb founded as he asked Nigerian Gahanain actress Yvonne Okoro to join him on stage for a dance.

This incident was said to have taken place at the recently concluded Ghana Music Awards which was held in Ghana.

The motive behind this attitude, according to a source, is that Yvonne Okoro is angry with the fact that Iyanya dumped fellow actress Yvonne Nelson.

It was gathered that Iyanya was called up stage to perform, when he called Yvonne Okoro to join him, but the actress felt reluctant and only spent some minutes with him and left.