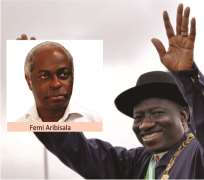 No public commentator has as yet delivered as robust an analysis of the forthcoming 2015 presidential election as a regular columnist in the Vanguard, the intrepid Femi Aribisala. In a recent article, titled: 'The 2015 presidential election will not be televised', Aribisala presented a reading of the watershed election and postulated: 'If, as many believe, Goodluck Jonathan is going to run for re-election in 2015, then the next president of the Federal Republic of Nigeria will be Goodluck Jonathan.'

Be that as it may, this writer is concerned that the sense of inevitability conveyed by Aribisala's article may have stemmed from a reading of the situation that does not fully take into account several factors that now dominate the Nigerian political space. These factors include the growing sophistication of the electorate, the realities of Jonathan's performance in office (discounting the propaganda for and against him), the past records of Jonathan's would-be opponents, and the future expectations of Nigerians.

To be fair, Aribisala did explore the chances of General Muhammadu Buhariâ€'the most likely candidate of the All Progressives Congress (APC)â€'at the 2015 presidential election. According to Aribisala, 'Supporters of Buhari should read the tea-leaves. How long will it take before they realise a Buhari presidency is a pie-in-the-sky? With every election Buhari has run, he has lost more woefully than the last one. With every election he has lost, he has gone in protest all the way to the Supreme Court, but to no avail.' Aribisala added that, 'There is nothing like fourth time lucky for Buhari. The 'luck' is on the side of this man called Goodluck.'

And for those who may think that former Vice President Atiku Abubakar might pose a challenge to a Jonathan re-election, Aribisala warned that, 'politically-experienced Atiku lost the [2011] PDP primaries by a landslide to 'inexperienced' Jonathan. If favourite-son Atiku could lose so woefully to Jonathan in 2011 when the president was a political neophyte, Northern strategists know they don't have any hope against Jonathan in 2015, after he would have been in power for six years.'

Lest anyone mistakes his candour for some form of affection for President Jonathan, Aribisala declares, 'I am not a Goodluck Jonathan supporter and have never been and will never be a card-carrying member of the PDP. All I do is call it as I see it; and this is what I see quite clearly: the result of the 2015 presidential election will be declared the day Goodluck Jonathan finally declares his candidacy. That is the reality of Nigerian politics today.'

While Aribisala is entitled to his views, it is somewhat unfair of him to foresee a Jonathan victory in 2015 purely on the basis of incumbency. It is even more unfair to discount the effects of Jonathan's performance in office, as if Nigerian voters are unable to see and think; as if the Jonathan-led administration did not create 1.6 million new jobs in 2013 alone.

To be clear, even critics of the President have conceded that the unbundling and privatisation of Power Holding Company of Nigeria (PHCN) is one of the best policies ever initiated by government in the interest of all Nigerians. Moreover, it is on record that Jonathan signed into law the Nigerian Oil and Gas Industry Content Development Bill which led Shell Petroleum, a foreign oil company operating in Nigeria, to engage a Nigerian company, S.C.C. Limited, to manufacture high pressure line pipes at a cost of N7.8 billion ($49.9 million) for the first time ever.

Under President Jonathan, the Federal Government commenced implementation of the National Industrial Revolution Plan (NIRP), which is aimed at industrialising Nigeria and diversifying the nation's economy. The proof that the NIRP is achieving results is seen in the fact that, for the first time in her history, Nigeria is exporting rather than importing cement.

As the President himself remarked in his 2014 New Year message, 'I am pleased to note that as a result of our backward integration policies, Nigeria has moved from a country that produced 2 million metric tonnes of cement in 2002, to a country that now has a capacity of 28.5 million metric tonnes. For the first time in our history, we have moved from being a net importer of cement to a net exporter.'

In the same vein, the President further revealed that foreign direct investment (FDI) into Nigeria has remained high. He said, 'For the second year running, the UN Conference on Trade and Development has named Nigeria as the number 1 destination for investments in Africa.'

Additionally, even the Chairman of the House of Representatives Committee on Agriculture, Mohammed Mongunoâ€'a member of the APCâ€'said, during an official event televised and broadcast by the AIT, 'I must say that the agricultural transformation agenda being pursued by your [Jonathan's] administration is unparalleled and unprecedented. We must learn to give credit where credit is due and I'm doing exactly that.'

Still under agriculture, it is well-known that 4.2 million farmers received subsidized input through the Jonathan-led administration's e-wallet system in 2013 alone. Even without delving into more aspects of his commendable performance, it is self-evident that the inevitability of Jonathan's re-election in 2015 is not as a result of the incumbency factorâ€'as Aribisala would have us believeâ€'but a direct consequence of the President's verifiable achievements in office.