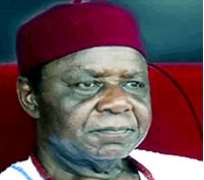 From the innermost of our hearts, IGBO UNION, LONDON mourns the passing of our very dear brother Chief Ralph Uwechue

It is now 16 years that this Great Grand Union of Ndigbo, (IGBO UNION, LONDON) gave Ralph a Resounding Handshake in London and also bestowed on him the title of Dike Eji Eje mba to show the world that he was a very Patriotic and Exemplary Igbo-man who served his people and others diligently.

For the records, Chief Ralph Uwechue at the age of 32, was the First Nigerian Ambassador to France. And it was during his Diplomatic service in France that the Nigeria and Biafra war broke out. The war threatened the existence of Igbo Nation and Ralph was presented with various tempting offers to remain loyal to the Nigerian Government or look the other way while his own people are annihilated. Ralph turned down all the offers, refused to be a saboteur and stood firmly in defence of his own people-Ndigbo.

'Truly and with a heavy heart Igbo Union, London mourn our one and irreplaceable Ralph Uwechue. You stood firm and fought to the end. We salute your steadfastness, indefatigability and courage in the face of threat/danger even to your life' said Mazi Kanu Ikenga President of Igbo Union, London.

And as you travel to meet your Creator and fellow compatriots like Dr. Nnamdi Azikiwe, Dr. M.I. Okpara, Mazi Mbonu Ojike, Dr. K O Mbadiwe, Dim (HE) Odumegwu Ojukwu, Mazi Udeozo, Dr. Nzimiro, Mazi Udeariri and others whose sun set before yours, be assured that your memory and all the ideals you stood firmly and fought for will live on.

We Pray that God in His infinite Mercy grant you eternal Rest in His Kingdom.