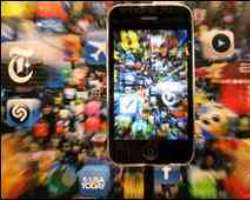 The global appetite for mobile applications will explode over the next two years, new research shows.

A study done for Getjar, the world's second biggest app store, said the market will grow to $17.5bn (£12bn) in the next two years.

It found there had been a gold rush with the number of app stores rising from four before 2008 to 48 today.

The study also suggests Apple's domination of the market could be challenged.

“We wanted to find out the real value of the industry because we felt certain segments like the iPhone were being over-hyped and so-called feature phones were being under-hyped,” said Getjar founder and chief executive officer Ilja Laurs.

Feature phones are less powerful than smart phones but can still run some third-party software.

While Apple's App Store is regarded as the dominant player, there are many more to choose from including those from BlackBerry, Microsoft, Google, Nokia, and Samsung.

Google's Android Marketplace, for instance, has more than 30,000 apps made for smartphones running on its mobile operating system.

Mr Laurs said the figures attributed to the iPhone's value have been unbelievable in some cases.

Mr Laurs said the research found that feature phones should not be ignored in the rush to create apps for smartphones.

“It is almost as if these phones don't exist. We know smartphones are an extremely important phenomenon, but in terms of consumer mindshare and revenue share, feature phones represent 90% of the global market compared to 10% for smartphones and data cards.”

“Advertising and the sale of virtual goods has helped expand choices for developers and we will see all of that ramp up in the next couple of years,” he told the BBC.

But most commentators think Apple's paid model will survive for the foreseeable future.

“I wouldn't say it is going to die, but the industry is going to evolve in alternative directions ,” said Getjar's Mr Laurs.

Apple's iPad, for example, is expected to boost the app market according to statistics from analytics firm Flurry.

Developers are looking at what opportunities the iPad offers them

It reported that developer activity for the iPhone has risen 185% in advance of the iPad's April arrival. Applications for the iPhone can be ported over to the new device.

“We have definitely seen a shift back to the iPhone with the anticipation of the iPad and a little bit of the disappointment with the Nexus 1 (Google phone),” Simon Khalaf, chief executive of Flurry Analystics told business site MarketWatch.com.

“Definitely there has been a rush of applications. It will invite a new wave of developers and it is a very cool device so people are going to develop for it.”