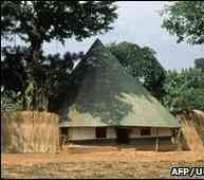 Uganda's Kasubi royal tombs gutted by fire
The tombs had become major tourist attractions
The tombs of Ugandan regional kings have been wrecked by fire, sparking huge protests amid claims of arson.

Thousands of people poured on to the streets of Kampala and eyewitnesses said at least one person was killed after the military fired on crowds.

It is not clear what started the fire at the Unesco-listed site.

The 19th Century structure was a burial site for kings of the Buganda region. The kingdom has had uneasy relations with the central government recently.

Eyewitnesses say President Yoweri Museveni tried to visit the Kasubi tombs, but relations between the president and supporters of the region's current king are currently poor and the crowd blocked Mr Museveni's convoy.

A dispute over territory between the king and President Yoweri Museveni led to mass riots late last year.

The BBC's Joshua Mmali, at the scene of the fire in Kasubi, a district of Kampala, says people are mourning the loss of the monuments.

He says the tombs are revered among some people in the Buganda region as a symbol of what had traditionally belonged to their kingdom.

Buganda is the largest of Uganda's four ancient kingdoms.

They were abolished in 1966 but reinstated by Mr Museveni's government in 1993.

However, he restored them only as cultural institutions with no political power.