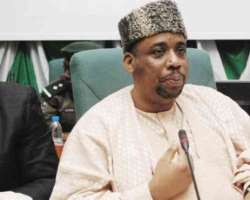 The House of Representative on Tuesday warned that it will henceforth regard as 'illegal' future presidential special advisers named by Acting President, Goodluck Jonathan, if the appointments are carried out without a joint approval of the House.

The House granted a belated approval for the five new special advisers requested last week by Mr. Jonathan, after accusing him of breaching constitutional provisions which requires such approval to be proffered by both chambers.

'We have identified that there is a problem in the past with the executive,' said Usman Nafada, the Deputy Speaker.

'This will be the last time. Henceforth, if they write the Senate without writing the House, whatever they do is illegal.'

The lawmakers' resolution is viewed as being capable of worsening the rift that arose between the two chambers in 2008 when an attempt at a joint review of the constitution, failed.

The row had deepened late 2009 after both arms of the National Assembly disagreed over the venue of a prospective 2010 budget presentation by President Umaru Yar'Adua.

Mr. Yar'adua himself had apologised to the lawmakers after seeking for such approval for special advisers early in his term, from the Senate alone.

The president said he regretted the slight and subsequently forwarded the same request to the House after the Senate had given its approval.

Separate but equal
The lawmakers raised the provisions of Section 151, subsection 2, of the Constitution, which demands that 'the number of such special advisers and their remuneration and allowances, shall be as prescribed by law or by resolution of the National Assembly.'

Mr. Jonathan's attention was also drawn to the same provision, after he had sought and secured the approval of only the Senate for the appointment of five special advisers last week.

The acting president, according to the Mr. Nafada, apologised for the error and had also remitted the request letter to the House on a later date.

The representatives gave approval for the appointment of the five Advisers, and also resolved that their remuneration and allowances, as stated in the law, be in line with that prescribed by the Remuneration of Public and Political Office Holders Act, 2002 as amended.

But that decision, Mr. Nafada, who presided over Tuesday's plenary, said, will be the last. 'This House is not an inferior House. The constitution says send the list to the Senate and the House at the same time.' The requirement that the National Assembly and not the Senate, effect such approvals, is recorded by the constitution only in respect of special advisers.

For ministers, the law requires only the Senate to do the screening.

But members of the House still push for equal powers with the Senate and have many times declared that the constitution made no mention of 'upper' or lower' chambers, in reference to both arms of the National Assembly.

'I brought this issue last Thursday reminding this chamber that the House was slighted,' said Halims Agoda (PDP, Delta State), regarding the late approval. 'We need to be thoroughly guided by the constitution. If ministers are to be appointed, the appointing authority must look at the constitution to know what it says about the procedures.