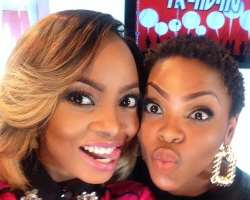 Petite and pretty Nigerian singer, Chidinma Ekile was hosted by popular On Air Personality, Toke Makinwa recently on the 'Trending Show” which shows on HipTv Channel.

A selfie of the 'kedike' crooner and Toke together, after the show was released, to which their fans didn't take lightly, as they made mockery of Chidinma's eyebrow makeup.

Meanwhile, the sultry songstress,who debuted after her win at the MTN music reality Television show, tagged 'Project Fame West Africa' has announced that, the video of her latest single 'Oh Baby' which she featured Hip-life singer, Flavour, drops soon.