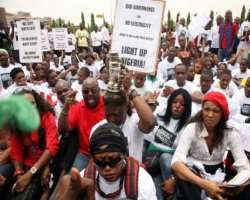 The youths who marched under the coalition 'Enough Is Enough' were prevented by state police from entering the premises of the National Assembly to vent their anger and frustrations with Assembly leaders.

The visibly angry youths with their placards sat in front of the first gate to the Assembly for a while before forcefully trying to gain entry into the complex but were again prevented by policemen.

The youths are demanding that President Yar'Adua who is gravely ill should resign from office or be impeached by the National Assembly. The President has not been seen in public since November 23, 2009 and information on his current state of health has been secretly guarded by his wife, Turai.

Nigerian politicians are sharply divided on how to completely resolve the leadership crisis facing the country due to his absence. Some insist on Yar'Adua's removal from office while others argue that the current measure taken, which elevated Vice President Goodluck Jonathan to Acting President, should suffice in the interim.

Nigeria is currently at its all time low with crippling electricity supply, corruption and lack of visionary leadership.

"This was an anti-system rally. We're anti a system that would even condone a man who is absent from his duty for three months." Chude Jideonwo told CNN.

"We, the youth of Nigeria demand that President Yar'Adua should resume or resign. We've tasted how delicious democracy is and Nigerians have finally begun to flex their democratic muscles.

"Let history record that this was the day Nigerian youths came together to take charge of their country," he added.

Nigerian under 35 make up 70 percent of Nigerian estimated 150 million population according to the CIA World Factbook.