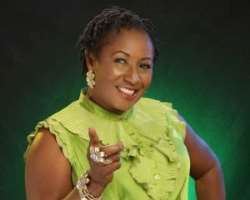 Recently, Nollywood actress, Patience Ozokwo was in Kumasi, Ghana, to shoot a collaborative film between Ghana and Nigeria titled 'Mama Africa'. While in the country, she called on African filmmakers to embrace indigenous language in their movie production.

"When one makes mistakes in English, the whole country laughs at the person, but we forget it's not our language, but rather it's the white man who forced us to learn it; so if Africa needs to grow, one of the things we can grow with is our language."