APC Is Now In Control Of Rivers State Politics, PDP Is Dead 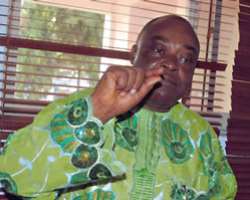 Former spokesman of the defunct New Peoples Democratic Party and the Senior Special Assistant on Media to the Rivers State Chairman of the All Progressives Congress, Chukwuemeka Eze, in this interview with NF-Reports, speaks on the strength of APC in the state.

The All Progressives Congress seeks to control Rivers State Government in 2015. How does it intend to achieve this?

We should understand that Rivers State used to be controlled by the Peoples Democratic Party, but due to the turn of events – the defection of Governor Rotimi Amaechi to All Progressives Congress and the resulting takeover of all the structures by the APC – Rivers State ceased to be a PDP state. The truth of the matter is that if the governor could switch over to APC with all the structure that used to belong to PDP, any human being thinking of changing the situation of things now is a dreamer. Nothing will change the situation because in 2015, an APC government will be installed in Rivers State.

The PDP at the centre under President Goodluck Jonathan has declared itself an enemy of Rivers State and no discerning indigene of Rivers State will vote for President Jonathan and the PDP. The ceding of Rivers oil wells to neighbouring states, including Soku oil wells ceded to Bayelsa State, is fresh in our minds. We are also aware of the ceding of some oil wells to Abia State; and there is no federal presence in the state in terms of projects. So, why would a Rivers man associate himself with anything that is Jonathan? As I speak with you, the APC is fully on ground in Rivers State.

Are you underrating the influence of the Supervising Minister of Education, Nyesom Wike, a staunch PDP member, who hails from the Rivers State?

The minister of education is even helping us in Rivers State. The presence of Wike in the government of President Jonathan is helping our course. He (Wike) is a tool for our campaign because he has worsened President Jonathan's case as far as Rivers State is concerned. When some visiting governors came to Rivers, we believe it was Wike who ensured that those people were humiliated at the airport. Wike also ensured that the former police commissioner of the state was an instrument, not only of intimidation, but of insecurity in the state. And we saw the negative report all over the world that followed the actions of the former state police commissioner. Considering all these, under what premise would Rivers people vote for PDP?

But the President is optimistic that the PDP will win in some States, including Rivers.

With due respect to President Jonathan, I'm not satisfied with his (President) understanding of politics. This is a man, who God placed where he is today. Instead of appreciating God, he is going contrary to what is expected of him. Instead of identifying with the people, where is he? Are those who supported Jonathan to become President still with him? He (President Jonathan) cannot say former President Olusegun Obasanjo did not play a part in his emergence as the President of this country. Of all the states in the country, Rivers State gave him the highest number of votes, and Governor Amaechi made it possible. Is Governor Amaechi with him now? Some governors in the North ensured that their own brother failed for him (Jonathan) to emerge. The question now is: Are these governors still with him? Who then would make him President in 2015? We are praying that PDP should give him the presidential ticket and that will mean we do not need to do much campaign anymore. Remember that polytechnic students and those in colleges of education are not in school. They have parents. Which parent would consider PDP in 2015? In Rivers State, the APC is everywhere and the political calculation does not favour the PDP in the forthcoming election.

The state APC at a point raised the alarm that PDP-sponsored thugs attacked its members at its membership registration centres. What actually happened?

The facts are there. Journalists were there. They were all filmed and pictured. Due to the fear that the people have rejected the PDP, they decided to disrupt the registration of our members. Our people were attacked; some were killed. We are aware of what happened in Degema and Asari-Toru, where our people were attacked. What happened in Obio/Akpor during the registration of our members is still fresh in our minds. The Rivers people are asking for change and most of them want to be counted among those that would be part of the liberation that is going on in Rivers State. Not minding the intimidation and attacks from the PDP during this period, we still have a reasonable number of people who want to be members of the APC.

Rivers PDP dismissed the claim that the APC registered 100,000 non-indigenes during the exercise.

What did you expect them to say? A drowning man will always look for something to hold onto. The truth is that the PDP no longer exists in Rivers State. One may not be surprised by their statement because they (PDP) have been thinking of how possible it is for the APC in Rivers State to register 100,000 non-indigenes. But the question there is: What factors made these non-indigenes to register with the APC? Let me remind the PDP that the figure we gave is only a preliminary report, not the main report.

Are you expecting higher figures?
Yes. This is because the preliminary report is based on the few local government areas that submitted their reports. Before that release was issued, we got further reports. Actually, the number of non-indigenes that registered based on the record we have today is about 303,000. This is possible because the people of Rivers State are accommodating. Due to the kind nature of the people of Rivers, we have about 1.6 million non-indigenes in the state.

Why would non-indigenes support the APC and not the PDP?

Take a look at the nature and character of Governor Rotimi Amaechi. This is a man who is married to one of us (non-indigenes). If he is married to one of us, then we have a stake in his (Amaechi) administration and if we have a stake in his administration, we should do everything possible in order to make sure that the administration succeeds. When you look at the characters that parade themselves now as PDP leaders in the state, you would find out that they are not popular, especially among the non-indigenes. Most importantly, let us not forget that we are in Amaechi's administration. Our son, Chuma Chinda, is the commissioner for Commerce and Industry. He is the leader of the non-indigenes in Rivers State.

Where is he from?
He is from Delta State. Our son, Ade Adeogun is the Sole Administrator of the State Environmental Sanitation Authority. Our son, David Iyofor is the Chief Press Secretary to the Governor. Tell me why we should not identify with the movement or aspiration of this man (Amaechi). What does the PDP have that would warrant any non-indigene in Rivers to identify with it? We pity them (PDP leaders) because of the situation they have found themselves in; because they currently have no rallying point that any person can identify with.

Considering the anxiety and expectations from the PDP and the APC, don't you foresee that the 2015 election would be marred by violence?

Is it possible for any election involving the PDP to be violent-free? It is not possible because this is a party that has been violent since the present leadership took over. Most of them are not founding fathers of the PDP and that is why they are ignorant of the principles of the party.

Are you saying the PDP is finished in the state?