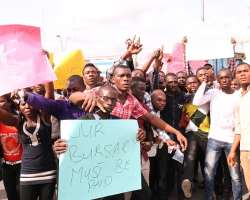 The Party applauds the courage and unanimous disposition of the students against monumental injustice and deliberate denial of their right to benefit from the bursary scheme of the government, which had been in place before the inauguration of the Amaechi government, noting that the students' action has vindicated its unshakeable position on the high level of corruption in the education sector in the State.

The PDP believes that denying the students their bursary entitlements for three years was a demonstration of the Governor's insensitivity to the plights of the students, who are the leaders of tomorrow, and pride of the State.

The Party notes that any government that turns deaf ears to the cries of the youths and students is a failure, and does not worth its name and also deserves not to exist.

The PDP therefore admonishes the students and their leaders not to be intimidated by the oppressive tendencies and actions of the Government aimed at causing division and acrimony amongst them but to remain firm and determined until the battle is won.