Going, Going, Gone! Has Gusau Gone Yet? Wake Me Up When Gusau Is Gone 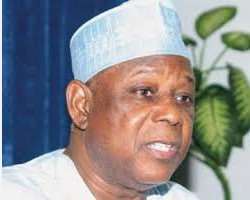 Why in Good God's name did Jonathan not accept Gusau's resignation letter? *That's a rhetorical question. We know why; because Jonathan is desperate for the voting bloc he believes Gusau and Babangida can bring him. Little surprise Jonathan's government is filled with Babangida's men. In the words of Fela: “They take old politicians wey rule Nigeria before the same old politicians who spoiled Nigeria before.”

Jonathan is tucked in, surrounded by his heroes—Senate Pres. David Mark, NSA Dasuki, Chief of Staff Arogbofa and new defence Minsiter Gusau. All old dictator Babangida military boys. Yes, the boys who orchestrated the painful coups Nigeria hopes to forget. Gusau in particular is a coup tactician. If you love coups then you gotta love Gusau. It was he and Babangida that ousted the Shagari civilian regime. It was he and Babangida again that ousted our better military leaders, Buhari and Idiagbon. It was he and Abacha that ousted the 3rd republic civilian President, Ernest Shonekan and implanted Abacha to reign over us, kill us, poison us with deadly petrol and steal our billions. It is no surprise that Jonathan honoured Abacha. Perhaps that was one of the conditions Gusau gave him before accepting his pleas to join his cabinet.

It was with great relief that many of us Nigerians read in the news that Gusau had quit. Good riddance, we said. It has been certified by multiple sources that Gusau tendered a resignation letter. Evidently Jonathan begged him to stay. And with $20-127 billion in accounts across the world, it is hard for your “begging” not to yield fruit.

The story as relayed by credible media goes that Gusau was snubbed by the military for two days. Well, kudos to these boys. They have been busy, Sir Gusau. Have you not seen the success they have achieved at last in the North East? Did you want to stall the hot pursuit of Boko Haram terrorists who have operated with confidence killing our youth and elderly for the better parts of the past 5 years, for them to come dine with you?

When you were NSA, three times, can we ask what you, who they keep repeating, come with so much 'experience,' did to forestall the development of the terror that plagues Nigeria north and South? Dear Gusau, were you not the NSA and head of our security department when Boko Haram, first called 'Nigerian Taliban,' fully came into being and begun their reign of terror in full impunity? What did you do about Mohammed Yusuf then? Is it true as is reported in authentic dailies, that when then President Obasanjo asked you about these northern terrorists, you protected them by telling him that 'no such group existed?'

What did you do about MEND Niger Delta terrorists who imported all the guns they desired and sabotaged Nigeria's economy, leading to nation-wide suffering, pollution and thousands of related deaths for all the years you were NSA under Obasanjo? Is this the 'experience' you are bringing to the table and the stuff you wished the Military chief's to run to you to discuss? Ok, be happy. They were not snubbing you, take it that they were sort of heavy-built and walked over slowly. Hope that lifts your pride a little.

Seriously, Nigeria is little more than hopeless. We cannot employ any youth or new breed. We have to beg Septuagenarians like Gusau to come back and head our government's most sensitive departments. Hot Cayenne pepper must be rubbed into our gashes. Our Youth are totally brainless and bereft of ideas. Yes, that's Jonathan and his supporters' Nigeria for you.

If my job is to secure a nation and under my reign as its head of security, terrorists establish and proliferate across the land, I believe I must be locked up in jail at the very least. Is this not correct?

Regardless of the indisputable FACT that with three tenures as National Security Adviser, NSA, Mohammed Aliyu from Gusau only succeeded in protecting the establishment and institution of terror in Nigeria, we 'need' him back. Well, perhaps we actually do. After all, it is the one who supervised the formation of this terror on our land that knows where the root is and can end it… if he sincerely plans to. It's best to keep your money with the thief, they say. But we will not know his heart and whether he has had a change of heart till we run to his call, bend to his wishes and endure him; so let's.

We know that calling on NSA Sarki Mukhtar, yes that late Yar'Adua NSA who bravely accosted and eliminated the Boko Haram threat in its tracks and also wisely, under the Yar'Adua leadership established the Amnesty for MEND as the best solution to that other crises which he inherited from Gusau, would be a 'poor' choice for Minister of Defence, because for one, he may not bring votes for Jonathan and secondly he is not an Abacha fan, and we 'love' the 'great' Abacha, don't we?

Hopefully this dream that the Great Gusau has gone to do what the responsible elderly do—retire, sit back and advise the new generation or as may apply, sit and regret the errors of their youth and hope to pass away with honour, not caught and imprisoned for their established crimes—will come to pass; till then, those of us who aspire for the progress of Nigeria must return to sleep.

Please wake me up when Gusau is gone.
Dr. Peregrino Brimah
http://ENDS.ng [Every Nigerian Do Something]
Email: [email protected] Twitter: @EveryNigerian