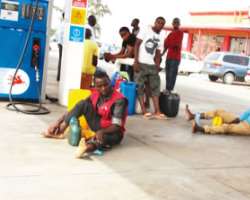 
Lagosians waiting to buy fuel at a filling station at Otedola Bridge on the Lagos-Ibadan Expressway in Lagos…on Tuesday.

| credits: Olatunji Obasa
AS the world's 13th largest producer of crude oil, Nigeria has no business experiencing petrol shortages. But, as we have just witnessed, the country has become so dysfunctional that fuel queues and scarcity of petroleum products have become so frequent and Nigerians go through a harrowing experience getting the products. Huge oil resources have turned to a curse. The main factors responsible for the distress facing us have been in the public domain since shortages started in the 1990s.

These problems include, but are not limited to, the mismanagement of our public refineries and massive corruption. For years, the four state-owned refineries have been under-producing, leading to the shameless and graft-prone importation of refined petroleum products. We also have the Nigerian National Petroleum Corporation, the inefficient, out-of-control public company that is notorious for its opacity, illegalities and corruption. The NNPC has been receiving 445,000 barrels of oil per day for domestic refining for long, yet it cannot meet national demand or account for its sleazy swap deals with foreign refiners. That allocation is about a fifth of our daily crude oil production, which averages 2.3 million bpd.

According to the report of a Presidential committee chaired by a former Finance Minister, Idika Kalu, the refineries have been producing at a mere 18 per cent of their capacity, a far cry from what is needed to meet the national demand. The Nigeria Extractive Industries Transparency Initiative confirmed the charade by the NNPC during its recent presentation to the House of Representatives. For instance, NEITI stated that the Port Harcourt Refinery 'got 161,916 bpd but refined only 19,363 bpd in 2009; 166,523 bpd in 2010 but refined 34,703 bpd; and 164,454 bpd was allocated in 2011, whereas only 45,394 bpd was refined.' The swap deals with refiners in Europe for the rest of the 445,000 bpd is mired in graft and opaque transactions. It is obvious that our refineries cannot handle the daily allocation of crude while the allocation is not accounted for.

However, the most critical player in the current petrol scarcity conundrum that is undermining the economy is the Federal Government. Helped by a compromised parliament, the government has turned the NNPC into a goldmine for slush funds, bleeding the country of huge revenues. With an approval from the parliament, the oil ministry took a loan of $1.6 billion in 2012 for the Turn Around Maintenance of the refineries, but the facilities remain comatose. There is nothing so far to show for the repairs, which the government had said would raise capacity utilisation to 90 per cent.

In furtherance of official corruption, in 2011, the number of petroleum importers increased suddenly from 49 to 140, thereby incurring N1.7 trillion on petrol subsidy when only N248 billion was appropriated for this by the National Assembly. In 2014, the Federal Government has proposed N971.1 billion for petrol subsidy, about the same figure for the previous year despite the $1.6 billion injected into TAM. This means that the refineries are not reducing our dependence on imported refined products by a jot.

We cannot continue like this. The first step is to openly and urgently privatise the refineries and set a date when the importation of refined products would end. All over the world, governments are privatising key public assets such as Heathrow and Gatwick Airports in London, United Kingdom. The government must discuss and give assurances to organisations like the labour unions, which are opposed to privatisation, and return to the plan unfolded by Diezani Alison-Madueke, the Petroleum Minister, in London last year, to sell the refineries.

We cannot continue to behave as if crude oil refining is rocket science. That this enterprise thrives in the Niger Delta as an illicit business underscores this fact. The untenable official excuse of pipeline vandalism for our woes in the petroleum downstream sector has become jejune. This is because, in 2011, the government awarded a $103.4 million pipeline surveillance contract to one of the Niger Delta militants. Similar contracts of N2 billion and N580 million to others followed. The government must reform this sector of the economy with uncommon urgency and resolve.

It should empower the operations of private oil investors. Abuja must critically examine why none of the licensed refineries has been able to begin operations. We have argued consistently as a newspaper that the transparent privatisation of the refineries will be for the overall good of the economy. No more government control, rent-seeking and inefficiency that have defined the operations of the petroleum downstream sector. The United States government does not own any oil company; neither does it manage refineries, but it collects about $85 million per day in various taxes, rents and royalties, according to the American Petroleum Institute. In fine-tuning the process, the government could start by facilitating the operations of three of the most serious among the licensed operators, as recommended by the Idika Kalu committee.

Also important is the need for a quick review of the 445,000 bpd allocation to the NNPC. This policy sustains a huge corruption racket and wastefulness; the figure must be reduced drastically to what the corporation can handle. Nigerians are tired of the inefficiency and graft that have made recurrent petrol shortages their lot.

The NNPC should be divested of its interest in the downstream operations of the oil industry. Privately-owned firms can do this effectively, and this leaves the NNPC with the upstream sector, which is more than enough for it to concentrate on.