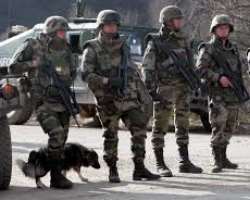 
NATO offered its condolences over the deaths and promised action to avoid further such mistakes, while President Hamid Karzai's spokesman said an investigation had been launched into the attack.


Karzai, who is currently on a state visit to Sri Lanka, has often used botched air strikes in the past to launch bitter criticism of the international military effort in Afghanistan.


Civilian casualties have been one of the most sensitive issues of the war and a key reason cited by Karzai for not signing a deal that would allow several thousand US troops to stay in Afghanistan after this year.


'At 3:30am this morning, due to a NATO air strike in Charkh district, Logar province, five service members of the Afghan national army were martyred and eight others were wounded,' defence ministry spokesman Zahir Azimi said on his Twitter account.


Khalilullah Kamal, the Charkh district governor, told AFP he had visited the site of the attack, which he said was from a US drone.


'The post is totally destroyed,' he said. 'The Americans used to be in that post but since they left, the ANA (Afghan national army) took over. The post is on a hilltop. The attack was conducted by drones.'


'An investigation is being conducted at this time to determine the circumstances that led to this unfortunate incident,' it said.


'Our condolences go out to the families of the ANA soldiers who lost their lives and were wounded… we will determine what actions will be taken to ensure incidents like this do not happen again.'


Karzai, who is due to stand down after a presidential election on April 5, in an interview this week expressed his 'extreme anger' at the United States as it prepares to end its 13-year war in his country.


'It was not a joint operation and no air support or no air strike was asked by Afghan security forces,' Faizi told AFP. 'NATO has to bring clarity about this incident.'


But while air strikes have been an important weapon in the fight against the insurgents, they have also proved hugely controversial since they have led to numerous civilian deaths.


In January the president, who has ruled since the fall of the Taliban in 2001, accused the United States of killing seven children and a woman in an air strike in central Afghanistan.


Late last year Karzai made a surprise decision not to promptly sign the bilateral security agreement (BSA) with the United States, leading to the threat of a complete withdrawal of NATO troops by the end of 2014.


The BSA would see 8-12,000 US troops remain in Afghanistan to provide training and assistance in the battle against the Taliban after the NATO combat mission ends in December.


Signing the agreement is also a precondition for the delivery of billions of dollars in Western aid.


Afghanistan's army and police have developed rapidly in the past four years, but the country risks slipping into turmoil without foreign assistance if Islamist militias and warlords vie for power. (AFP).