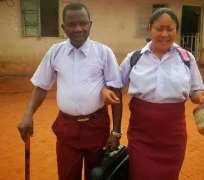 The duo of veteran Nollywood stars, Ngozi Ezeonu and Chiwetalu Agu have taken a step to go back to the classroom.

They are playing the roles of school 'pupils' in a new movie. Pictures showing the duo dressed in school uniforms were recently released on the internet and they are gradually trending. to me
This is not the first time it will happen, it is usually done to politicians, but at the edge of glory, many things can be expected, especially when there are so much cheers from the crowd you are facing. An incident like this happened at last year felebration when Wizkid created a Stampede by throwing money into the cheering crowd during his performance.

Music artiste Iyanya who currently bagged an endorsement deal with Lenovo Computers, is at the computer village Ikeja, where one of the Company's outlet was recently opened. Iyanya has been mobbed by fans trying to catch a glimpse of the superstar in his moving vehicle, he brought out his head out of the car roof and threw money to the crowd, Which made his fans rush to the scene to be part of the largesse. The act which has created pandemonium in the mobile village.