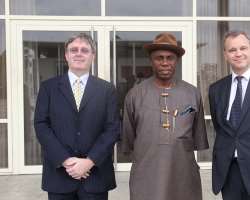 We have watched with amazement, sadness and unpleasant surprise the insensitiveness of the PDP-led Federal Government at the centre under the watch of President Goodluck Jonathan pertaining to the wellbeing of Nigerians, particularly Rivers State and her people. Of particular worry to us is the Federal Government's deliberate refusal to tackle the twin evil of insecurity and oil theft ravaging Rivers State and other parts of the Niger Delta, which has drastically reduced the revenue accruing to the Federation Account, thereby impoverishing most of the states, thus incapacitating them. As we write, many States are unable to pay workers salaries, not to talk of paying contractors or embarking on any meaningful projects to better the lives of Nigerians.

Our State Governor, Rt. Hon. Chibuike Rotimi Amaechi, had some days ago while hosting the British Minister for Africa and Member of Parliament, Mark Simonds, lamented about this issue of insensitiveness of the PDP Government at the centre to the insecurity and oil theft in Rivers State. According to the Governor, “My administration had procured two surveillance helicopters that would assist the Federal Government to fight oil theft, but shockingly the Federal Government has refused its arrival to the state.

The All Progressives Congress (APC), Rivers State Chapter, strongly condemns this act of gross wickedness by the Federal Government which raises serious questions about the sincerity of the PDP Government to fight corruption and protect the pipes that transport the crude oil that sustains the country's economy.

It beats our imagination that the purchase of the helicopters which had the blessing of the Federal Government at the outset should be sabotaged after the Rivers State Government had committed the whopping sum of N30b and is being made to pay demurrage annually. The refusal of the Federal Government to approve the release of these machines into the country that would have benefitted the entire Nigerians is a demonstration of how not to play politics with the life of Nigerians. This is a demonstration of how this government has alienated itself from those it governs and prefers to have our common patrimony kept in private hands while majority of Nigerians continue to wallow in poverty in the midst of plenty.

We are aware of the political differences between President Goodluck Jonathan and Governor Amaechi but must the entire Rivers State people and the rest of Nigerians be punished because of these differences? These days instead of President Jonathan addressing the worsening insecurity in the country that has resulted in the daily killing of unguarded Nigerians, he prefers to celebrate and go about absorbing expired politicians into PDP that Nigerians have rejected because of maladministration by the PDP-led Government. How unfortunate!

We hereby call on the National Assembly to hasten to investigate the helicopter shame and call the misguided Presidency to order before it shipwrecks our nation. We must as well state that we are very sad that the powers of the National Assembly are being eroded as most of its actions and suggestions are ignored at will by the Presidency that has become tyrannical, myopic, imperial, insensitive and uncaring about the plight of Nigerians. We urge the National Assembly, for God's sake and for the sake of the future of our country not only to exert its powers but also show leadership traits by saving our nation from a misguided and confused Presidency.