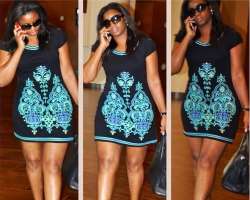 Omotola Jalade Ekeinde also known as Omosexy 's signature assets seems to be getting hotter , as the diva recently showed off her sexy legs and figure in a recent picture .

The proud mother of four was spotted rocking a sexy hot mini gown outfit that really highlighted her figure eight shape with a black sun glasses .
Despite the fact that she's a mother , Omosexy still maintain her shape which now looks hotter than ever , as her legs looked smoking hot in the hot mini gown outfit.

Omotola is one of the leading actress, singer, and philanthropist of an Ondo origin from Lagos, Nigeria , whom after her Nollywood film debut in 1995, has appeared in an astounding 300 films, selling millions of video copies.