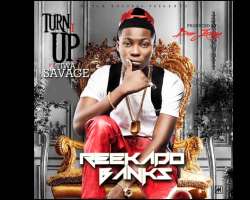 Don Jazzy has gotten another artiste activated in Mavin records, Reekado Banks who has a new album titled “Turn It Up” featuring Tiwa Savage. It is reported that it took months for him to come up to Mavin , Banks joins D'Prince, Tiwa Savage, Dr Sid and Di ja in the new Mavin crew.

His biography reads:He is called “REEKADO BANKS” and he is everything you can ask for. Born Solomon Ayoleyi Hanniel, Reekado Banks is a gifted singer and song writer. The final year History and Strategic student of the university of Lagos, Akoka is young, God fearing, fun and spontaneous. Best described as a fine combination of talent, Determination and swag, REEKADO BANKS is set to make history.
Imagine blending country, dancehall and afropop music in a Don Jazzy way. “Turn It Up” is just a snippet of Reekado Banks abilities. As a valuable addition to the incredible team of Don Jazzy, further strengthen the new frontline of the Mavin 2.0.”

Nothing Else Matters 'To Me Now'--Jim Iyke Talks On Deliverance From Evil Spirit.